Shungite figurine black cat is a symbol of independence, grace and strength. Such a statuette attracts well-being, and protects the house and all its inhabitants from adversity. Shungite statue black cat also converts negative energy into positive energy.

Shungite black cat figurine, as well as other figurines in our store are made by hand using only natural materials. The black cat statue made of 70% natural shungite stone and 30% magnesite.

A black stone cat statue is a symbol of independence, grace and strength.

She is the best antidepressant — graceful, gentle, the embodiment of comfort — and a receptacle of vices: lustful, lazy, arrogant… but, nevertheless, has long occupied a certain place in human culture, having come a long way from a deity to an ordinary representative of the urban fauna. And, although attitudes have changed from worship to simple human affection, the main thing — the cat always returns to the hearth. Loved her for it for thousands of years.

The symbol of cat can has various guises including in the form of figures from different materials. The most valuable are figures made by hand and from natural materials. For example, stone or wood. Our Sneaking cat figurine is made only from natural ingredients.

Above all, as the Chinese teachings of Feng Shui, it is a symbol that attracts good luck, associated with the mysteries of the Universe, according to the Eastern philosophical concept is considered a cat. Figures of this animal are usually placed at home and in the office to attract happiness and wealth, and the sculpture is placed in the South-Eastern (zone of wealth) part of the room. Such a statuette attracts well-being, and protects the house and all its inhabitants from adversity.

The black cat is a well-known symbol in many cultures, for example, the Celts considered the black cat a powerful talisman for wealth and successful hunting. According to some beliefs, a black cat absorbs negative energy, and then transforms it into positive. Therefore, a black cat is a talisman for the house, a protector from thieves and deceivers. Plus, it scares away angry people and makes it more likely that bad thoughts will remain outside the door when you get home.

How is made the shungite black cat figurine

The shungite black cat figurine in our store are made of 70% shungite stone and 30% magnesite. Shungite has the ability to absorb and neutralize EMF In addition, it helps to fight geopathogenic phenomena. Magnesite is a completely natural material. It’s designed to give the desired shape for Shungite. All figurines is installed on the stand. The stand is made of a single piece of 100% shungite stone. 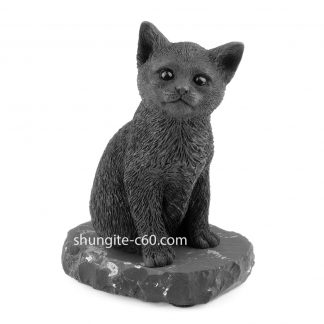