This shungite pendant zodiac circle is made from a single piece of rare natural shungite stone. Shungite is one of the rarest and most amazing minerals on earth. Shungite has the ability to absorb and emf protection. In addition, it helps to fight geopathogenic phenomena. The picture on a shungite necklace zodiac is applied by engraving. This pattern will not be erased and will be visible for a very long time. Shungite zodiac amulets awith engraved and pendants in our store are unique and nonrepeating. In addition, each of this amulet made by hand.
Shungite zodiac necklace is a natural or man-made object designed to protect people from harm and misfortune. Moreover, each shungite zodiac pendant has its own energy.

What zodiac sign is shungite suitable for? The fact is that a powerful shungite stone carries life itself, so its energy will be in tune with a person with any zodiac sign.

What can a shungite zodiac sign bring to its owner? In this case, the pendant performs not only the functions of a stylish accessory, but also the role of an amulet, which has a huge impact on the fate of the person wearing it. At all times, people have worn talismans with one purpose – to protect against evil forces and attract good energy.

Why is astrology able to predict?

The point is that astrology studies cycles. After all, in nature everything develops cyclically. For example, the life cycle is the development of any organism that goes from birth to death through youth, maturity and aging. In inanimate nature, an example is stars passing through the same phases of their life cycle. These include the daily cycle (morning, day, evening, night), the annual cycle (spring, summer, autumn, winter) and others.

In this case, astrology symbolically likens the same phases of various cyclic processes. For example, at the moment a person is born, there is a certain position of the planets in the sky. The planets continue their path in time, change their relative position according to the laws of Nature. Therefore, astrological forecasting is based on the fact that the future positions of the planets are known in advance. That is, a person living in sync with their cycles will experience such cyclical changes. That is, astrology studies the cycles of living and inanimate nature and therefore is able to predict.

Everyone knows that an important part of astrology is the zodiac. After all, every person has their own zodiac sign. Moreover, each sign is historically associated with an animal or mythological character. In turn, they reflect the deep essence of the archetype of the corresponding sign. Indeed, in Astrology there are no random names, they are all closely related to myths that describe the archetypes of astrological symbols. However, we all know that people of the same sign are often very different from each other in character and destiny. Archetypes are subdivisions of types within a sign. From what archetype a person belongs, his character and behavior, his system of values ​​and priorities largely depend.

You will find more pendants with engraved Zodiac Signs in this section.

Features of the production zodiac necklaces

We make each shungite pendant zodiac  from monolithic piece of real shungite stone, whose age is more than two billion years. This is one of the rarest and most unusual minerals on earth, it has the ability to absorb and protect against EMF. In addition, it helps to combat geopathogenic phenomena.
To a small extent, the black rock includes quartz and pyrite. They give the surface of finished goods a unique pattern with their white and gold colors. Sometimes there are small voids in the structure of these neighboring rocks. They look like very little dimples in quartz and pyrite stripes on shungite.

We use only natural shungite stone in production, so we cannot perfectly smooth the surface. And on the shungite zodiac amulets there are minor traces of machining.
Of course, someone makes perfectly smooth pendants, but only from some synthetic material. To do this, they simply fill in the form of epoxy resin, plastics and other polymers.
But our craftsmen carve products by hand from solid raw rock, and then polish from all sides. In the photographs, you may notice slight irregularities at the edges that appear as a result of physical cutting of the stone.

The master then polishes these tiny cuts while working on the entire workpiece. As a result, we get an organic shape of an shungite necklace on stone made of rare rock.
An shungite zodiac amulet made of true shungite will help to be in harmony with your body and spirit, to find inner unity.

We suggest you choose a shungite pendant zodiac circle for EMF protection size of 45 millimeters. Shungite stone effectively protects against EMF radiation even with a thin thickness in human hair, it is proved by scientific research. However, as the thickness of the material increases, the shielding efficiency increases according to a mathematical progression.

We produce shungite pendant zodiac circle from solid shungite stone. Next, we polish the disc on both sides, while the edges of the disc are not polished, but they are smooth to the touch. On the surface of the shungite circle, there may be traces of natural mineral inclusions of shungite, which give a special appearance to the stone. These include quartz and pyrite. Pyrite will appear as golden or yellowish specks or veins. At the same time, on the surface of a shungite product there may be some areas in the form of small pits or holes, as well as grooves in the form of holes. All these are traces of pyrite in shungite on a shungite necklace zodiac circle.

You can wear a pendant with shungite engraving on top or under clothes. If your clothing is light in color, there may be small traces of black shungite carbon on it. However, after a while it will stop. Moreover, if you try to strongly erase the shungite necklace zodiac circle, then you will simply erase the upper polished surface. This is not paint, just a polished surface. Do not overdo it, it will fade over time. Read in our article in more detail about shungite wearing.

The engraving on a shungite pendant zodiac circle.

Each shungite necklace zodiac circle will have a unique pattern. After all, the mineral companions of shungite give the black surface of this stone a unique inimitable pattern. In this case, the greatest contribution is made by quartz, which is white. But on a polished shungite surface, quartz looks like translucent or whitish veins. However, when we engrave shungite, white quartz inclusions can show through in the picture and you will see them. 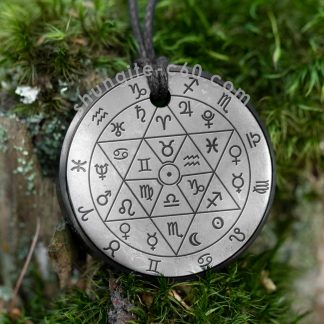 You're viewing: Shungite pendant Zodiac Circle plus your sign on on the reverse side $14.90 – $17.90
Select options