The original shungite pyramid 40mm from Russia are made of a single piece of genuine 100% Shungite stone. The size is specified for the base of the pyramid.

On our shungite site, the original shungite pyramid 40mm from Russia is presented with a base size of 4 cm or 1.57 inches. Each the item is carved from a single monolithic piece of 100% shungite stone. We make each polished shungite pyramid 4 cm manually. This is not a plastic or polymer product, obtained by curing in a mold.
As a result of the work of cutting natural stone, all our carved pyramids receive a unique size and weight, even if they are in the same size segment.
For example, a group of shungite pyramids for sale from a segment measuring shungite pyramid 4 cm at the base can have size of the base from 3.5 to 4.5 centimeters. It makes each product unique and individual. Therefore, we can safely assume that it is no longer possible to find a second exactly the same pyramid.

We made each polished shungite pyramid 4 cm by hand at our production facility in the Republic of Karelia (Russia). A karelian shungite pyramid made from a single piece of real 100% shungite mineral. This Shungite stone is mined at the world’s only Zazhoginsky shungite deposit. We guarantee the authenticity of our products.

Raw natural shungite has a rich black color. Rough to the touch surface. Gets his hands dirty, leaves black marks like coal. This is the result of the dust that is on this raw stone.
After the pyramid is cut from a single piece of stone, its surface undergoes primary processing. Therefore, the surface of the karelian shungite pyramid becomes matte and does not have such a rich black color, because part of the light begins to reflect from its surface.

Natural inclusions of pyrite and quartz in shungite stone

In addition, on such unpolished surface veins of other minerals are perfectly visible. Mainly these are the two main satellites of genuine shungite stone. These minerals are Pyrite (has Golden color of veins) and Quartzite (has whitish color of veins).

The surface of the unpolished shungite pyramid 40mm rough to the touch, in addition, it can get your hands dirty. This is the remains of dust that settled on the surface after primary treatment. If you don’t like it, just rinse your shungite pyramid under running water and wipe lightly with a soft cloth. After this procedure, your hands will no longer be dirty.

After the primary treatment, the finishing treatment of the surface of the shungite pyramid follows. That is, from a polished pyramid we make a polished pyramid. This requires additional time and effort, as well as special equipment.

Usually recommended pyramid classical shape sizes from 3 to 10 centimeters, and more. But we also make a original shungite pyramid 40mm with unpolished surface. These dimensions are for the base and not the height of the product. Also, these geometric shapes of natural rare stone can be used for energy charging and activation of water.

Above all, the shungite pyramid 4 cm middle size from Russia will be a great gift. This is really an unusual gift, which is made of one of the rarest and most unusual stones on earth. It is also a good gift for those who are not indifferent to their health, as well as for those who are familiar with the healing properties of the stone and who are convinced of the beneficial effects of Pyramid shapes.

Be the first to review “Shungite Pyramid 40 mm / 1.57 inches with a polished surface” Cancel reply 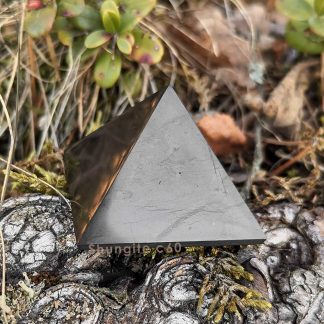