These pyramids are made of a single piece of genuine Shungite stone. The size is specified for the base of the pyramid.

On our website we present shungite pyramids for sale of different shapes and dimension. Each the item is carved from a single monolithic piece of real shungite stone. We make each pyramid manually. This is not a mold. As a result, each of our shungite pyramid has a unique size and weight even if they are in the same size segment. For example, a group of shungite pyramids for sale from a segment measuring 4 centimeters at the base can have size of the base from 3.7 to 4.3 centimeters. It makes each product unique and individual. We can safely assume that the second exactly the same pyramid can no longer be found.

In our shop 4 forms of shungite pyramids for sale are presented.

Raw natural shungite has a rich black color. Rough to the touch surface. Gets his hands dirty, leaves black marks like coal. This is the result of the dust that is on this raw stone. After the pyramid is cut from a single piece of stone, its surface undergoes primary processing. After that, the surface of the shungite pyramid becomes matte and does not have such a rich black color, because part of the light begins to reflect from its surface.

In addition, on such surface veins of other minerals are perfectly visible. Mainly these are the two main satellites of genuine shungite stone. These minerals are Pyrite (has Golden color of veins) and Quartzite (has whitish color of veins). Such veins on the surface of the pyramids are like human fingerprints, which have no repetition in nature. This is another distinctive feature that makes each product unique and not like the others.

The surface of the unpolished pyramid rough to the touch, in addition, it can get your hands dirty. This is the remains of dust that settled on the surface after primary treatment. If you don’t like it, just rinse your shungite pyramid under running water and wipe lightly with a soft cloth. After this procedure, your hands will no longer be dirty.

The polished surface of the shungite pyramid for sale has a rich black deep color. Its surface perfectly reflects the daylight, if you turn the pyramid at a certain angle. On such a surface traces of pyrite and quartzite are poorly visible, but still you can distinguish and see them. Just find the correct angle of light reflection on its surface. It should also be noted that both types of shungite surface are electrically conductive.

Usually a similar geometric shape of shungite is placed near the sources of dangerous EMF waves. The thicket of all, the screens of computer monitors. There is a lot of information that the dimensions of the pyramid affect its effectiveness and the distance at which it acts. However, we have not found specific scientific evidence on how the dimensions or shapes of various geometric shapes affect the effectiveness of shungite.

Usually recommended pyramid classical shape sizes from 5 to 10 centimeters. These dimensions are for the base and not the height of the product. Also, these geometric shapes of natural rare stone can be used for energy charging and activation of water. As follows from public recommendations for this purpose it is enough to place a pyramid in a vessel with water for 1-2 hours.
For water purification, it is hardly suitable. Especially when it comes to polished surfaces. This surface is devoid of sorption properties and does not absorb harmful impurities from the water. In addition, the surface of the pyramid is extremely small for contact with water. For these purposes, it is better to use natural raw stones Click here. 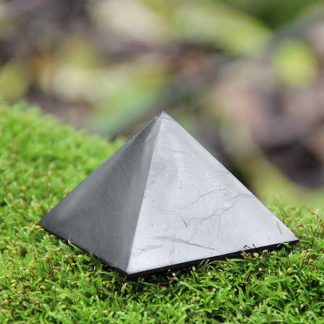