This shungite chakra pendant is made from a single piece of rare natural shungite stone. This black stone is one of the rarest and most amazing minerals on earth. Shungite has the ability to absorb and emf protection. In addition, it helps to fight geopathogenic phenomena. This unusual shape of shungite chakra pendant has the shape of a circle with the center inside. This form seems simple only at first glance. However, it is much more complicated than it looks. It’s not just a flat circle, it’s a streamlined convex shape. It takes a lot of time and effort for the master to create such a form. This shungite chakra pendant has a smooth polished surface. It is very pleasant to hold in your hand.

At first glance, can show that all the pendants of this type are similar to each other, but it is not quite so. Each pendant is made separately from the others by hand. As a result, no pendant is exactly like another.
A Chakra Pendant is a natural or man-made object designed to protect people from harm and misfortune. Moreover, each item has its own energy.

Word “chakra” in the diversion with Sanskrit means literally “wheel, circle.” Chakra is compared to a flower that has its own color, with many petals. The flower can be compressed, closed, rolled into a Bud, and can bloom and open wide. Chakra can be rolled up, but strong and strong, and can be small and inconspicuous. Chakras are a kind of antenna, receiving and transmitting energy peculiar to it.

In the human body, in its subtle bodies, there is a centralized energy system, which is a bioenergetic channels (nadis) through which energy circulates. On the interlacing and branching of energy channels there are energy centers-chakras, which are condensations of energy in the form of energy vortices, through which interaction with the outside world and the interchange of energies between all the subtle bodies of man is carried out.

We make each shungite chakra pendant from monolithic piece of real stone, whose age is more than two billion years. One of the main distinctive visual features of this rare mineral is the inclusion of pyrite and Quartz on its surface. They give the surface of finished goods a unique pattern with their white and gold colors. Sometimes there are small voids in the structure of these neighboring rocks. They look like very little dimples in quartz and pyrite stripes on shungite. 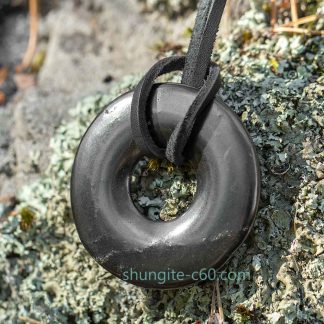