Each shungite cross pendant has a unique shape in the form of inclusions of Pyrite and Quartzite. Pyrite has a Golden color. Quartzite has a whitish color. These two minerals are an integral part of the real Shungite stone. As a result each amulet is unique and has no repetitions.

This shungite cross pendant is made from a single piece of rare natural shungite stone. This black stone is one of the rarest and most amazing minerals on earth. Shungite has the ability to absorb and emf protection. In addition, it helps to fight geopathogenic phenomena. This unusual shape of shungite cross pendant is in the form of a cross which is carved from a single piece of stone. At first glance, can show that all the pendants of this type are similar to each other, but it is not quite so. Each pendant is made separately from the others by hand. As a result, no pendant is exactly like another.
A Pendant is a natural or man-made object designed to protect people from harm and misfortune. Moreover, each item has its own energy.

The practice of using protective amulets and talisman came to us from the distant past, when the first people worshipped natural phenomena and have not yet given names to their Gods. But the living human mind had already learned to draw analogies and to see the symbolism and meaning of stones, herbs and signs in nature. The amulet in the form of a cross has been a strong talisman among all peoples since the most ancient times. The cross is not a Christian symbol, but an ancient pagan one. He was and in Slavic paganism, and have Celts, and in ancient Egypt. Almost everywhere the cross had similar symbols. He represented the unity of male and female, was a symbol of life, eternity and the Sun.

We make each shungite cross pendant from monolithic piece of real stone, whose age is more than two billion years. One of the main distinctive visual features of this rare mineral is the inclusion of pyrite and Quartz on its surface. They give the surface of finished goods a unique pattern with their white and gold colors. Sometimes there are small voids in the structure of these neighboring rocks. They look like very little dimples in quartz and pyrite stripes on shungite.

The master then polishes these tiny cuts while working on the entire workpiece. As a result, we get an organic shape of an shungite cross pendant made of rare rock.
Cross pendant made of true shungite will help to be in harmony with your body. Also will give you new strength and confidence to achieve the desired result.

Be the first to review “Shungite Pendant “Cross”” Cancel reply 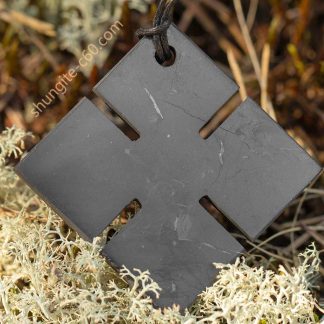