The shungite crystal pyramid 40 mm from Russia are made of a single piece of genuine 100% Shungite stone. The size is specified for the base of the pyramid.

On our shungite site, the shungite crystal pyramid from Russia, Karelia is presented with a base size of 40 mm or 1.57 inches. Each the item is carved from a single monolithic piece of 100% shungite stone. We make each unpolished shungite crystal pyramid 4cm/1.57 in manually. This is not a plastic or polymer product, obtained by curing in a mold.
As a result of the work of cutting natural stone, all our carved pyramids receive a unique size and weight, even if they are in the same size segment.
For example, a group of shungite pyramids for sale from a segment measuring shungite pyramid 4cm at the base can have size of the base from 3.5 to 4.5 centimeters. It makes each product unique and individual. Therefore, we can safely assume that it is no longer possible to find a second exactly the same pyramid.

How small is a 4 cm shungite pyramid?

Yes, this is the second smallest pyramid size we make. We make only a 3 cm/ 1.18 in pyramid smaller. You can estimate this size of 4cm from our photographs, where the pyramid lies in the palm of your hand.

Does such a small pyramid of 40 mm help in protecting against harmful electromagnetic waves?

Of course, yes, because scientists conducted research on shungite stone of very small thickness. Literally, they ground shungite into powder, smeared it with a very thin layer, its thickness was less than a human hair. Please read our large and great research article – shungite emf protection proof and stady, so that you have a complete idea of how shungite stone works against EMF.

A well-known scientific fact says that shungite is an amazing mineral, a distinctive feature of which is the ability to absorb dangerous waves that can have a negative impact on humans and animals. It is also known that each geometric figure is endowed with its own energy. The shungite pyramid 40 mm combines these two phenomena.

What else are the advantages of a small shungite pyramid?

In our opinion, the important value of a shungite pyramid small size is that it is not expensive. This 4cm pyramid is a bit more expensive than the 3cm, but it’s still cheap.
In our opinion, this is a good chance to create a large collection of pyramids. After all, a large collection of shungite pyramids is good because each pyramid is special and you may come across a pyramid with a unique pattern. It can be a rather black pyramid, or a pyramid with a wide variety of golden or white inclusions.

Above all, the shungite pyramid small size from Russia will be a great gift. This is really an unusual gift, which is made of one of the rarest and most unusual stones on earth. It is also a good gift for those who are not indifferent to their health, as well as for those who are familiar with the healing properties of the stone and who are convinced of the beneficial effects of Pyramid shapes.

Other sizes of shungite pyramids

We can make different size of karelian shungite pyramids.

The Unpolished surface (or non-polished) surface of the shungite crystal pyramid can be otherwise called matte. It is such a surface, when looking at which you will not see a bright shine. Such a surface almost does not reflect light. However, sometimes our unpolished pyramids have some very little sheen because we have polished them more heavily.

The peculiarity of unpolished shungite pyramids is that we see the natural pattern of shungite stone. In this pattern, one can see traces of shungite’s natural companions – golden pyrite and whitish quartz mineral. The pattern of each shungite crystal pyramid will always be unique.

The pattern of quartz and pyrite minerals sometimes consists of long solid lines that run through the pyramid. These are not cracks, but natural strips of shungite satellite minerals. Also on some pyramids you can find small holes from the pyrite mineral.

If we want to get a shiny surface of the pyramid, then we polish the matte pyramid. For this, special equipment is used. And as a result of repeated rubbing of the shungite surface, we get a very shiny shungite.
That is, as a result of polishing, we get a shiny, almost mirror-like surface of the shungite pyramid. However, it has a deep black color, because the main color of shungite is black.

A polished shungite crystal pyramid is not painted, it is a thin layer of a polished surface that glistens. Keep in mind that the top shiny polished surface is quite brittle and you shouldn’t rub it too hard as this will wear it off.

On a polished pyramid, inclusions of quartz and pyrite are much less visible, but you can still see them from a certain angle. And sometimes golden veins of pyrite and white stripes of quartz are clearly visible on a polished pyramid. Also, on some pyramids made of natural shungite stone, there may be small holes from pyrite minerals.

Unpolished shungite pyramids may contain shungite dust on their surface after production. She can get her hands dirty. Therefore, gently wipe with a soft cloth or rinse under running water at room temperature.

Do not allow temperature fluctuations, for example, you cannot bring a cold pyramid from the street under a stream of warm water. The pyramid may crack due to temperature changes. So just keep her warm at home until she warms up.

Also, don’t rub the polished pyramid too hard, as this will wear off the shine of the polished surface of pyramid.

How to use shungite pyramids.

First of all, shungite pyramids are suitable for protection against EMF, we also have a range of pyramids of different sizes from 30mm/1.18” to 100mm/3.94”. But we also make a genuine shungite crystal pyramid 40 mm with polished surface. These dimensions are for the base and not the height of the product.
Also, these geometric shapes of natural rare stone can be used for energy charging and activation of water. As follows from public recommendations for this purpose it is enough to place a pyramid in a vessel with water for 1-2 hours.

However, for water purification, shungite pyramid is hardly suitable. Especially when it comes to polished surfaces. This surface is devoid of sorption properties and does not absorb harmful impurities from the water. In addition, the surface of the pyramid is extremely small for contact with water. For these purposes, it is better to use natural raw shungite water stones.

In conclusion, it should be noted that all shungite pyramids for sale in our store are made of genuine shungite stone. We previously shipped via airmail from Russia. And currently we use a transit warehouse in the USA, so you can receive your order as quickly as possible. You can always see the shipping cost in your cart before you pay for your order.

Be the first to review “Shungite Pyramid 40 mm / 1.57 inches with a unpolished surface” Cancel reply 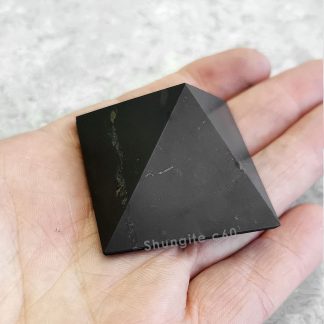