The shape and size of the shungite stone will differ from the photo, that is, it will be random. Shungite contains inclusions of quartz (white) and pyrite (yellow). We pre-washed the shungite stones so that you do not get dirty. However, rubbing a stone will leave a black carbon trace.

Each of these shungite tumbled stone has a large size. In order to give the raw shungite stone a rounded smooth shape, this must be processed. After this treatment, the coal-black stone becomes a lighter color, but the texture of the stone and the inclusions of pyrite and quartzite are still clearly visible on its surface. In addition, the surface of such a shungite tumbled stone has a natural texture as in nature, this is significantly different from the polished surface of shungite. This is a random shungite stone. The weight of the stone is approximately 20 grams to 900 grams (0.044 to 1.98 pounds). The stone will be different from the one shown in this photo.

Imagine an ancient stone that is half the age of the Earth? You will agree that if you hold such a mineral in your hand, you will feel a unique energy.
This may be due to the fact that shungite stone contains natural fullerenes. This is a special molecule of carbon 60, which is found on Earth only in shungite from Karelia. And this rounded molecule looks like a soccer ball.
In turn, shungite stone consists of a unique carbon. And this carbon has a special allotropic form. Further, researchers of shungite stone found that it consists of special round microparticles. Therefore, this composition is peculiar only to shungite. In conclusion, we talk about this in more detail in our article about shungite.

And in conclusion, you will not find this extremely shungite rare stone in any place on earth except Karelia. Because in ancient times, huge events took place on the territory of this region. As a result, shungite appeared on the Earth. Our store is located in the Republic of Karelia. Therefore, we guarantee the authenticity of our large shungite stones. And we also warn customers against buying shungite in other regions of Russia or in other countries, because there is a risk of forgery. 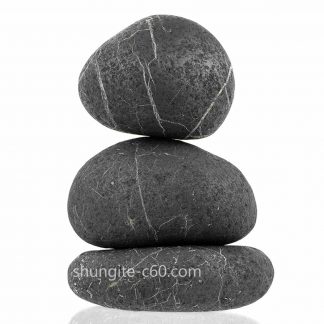