The shungite figurine bear as a symbol of fertility, strength and good health. At home, the bear will act as a guard guarding the hearth from negativity, anger of envious people.

Shungite figurine bear with balalaika, as well as other figurines in our store are made by hand using only natural materials.

The bear has long symbolized Russia in the foreign press, starting with imperial tsarist times, then through socialism to the present day. In Russia, the bear has long lived in fairy tales, on the coats of arms of many cities. And also trained bears were sent to the West from Russia. In England they were even sold under the Moskovitskie brand. At the same time, if you see a bear playing the balalaika, then you will certainly think about Russia. After all, as you know, all Russians know how to play the balalaika.

The BEAR is a symbol of good nature and rage, heroic strength and clumsiness, laziness and tender maternal feelings, gluttony and asceticism. Among the North American peoples, the bear is the king of beasts. This is the most powerful beast of the Northern forests. The bear is treated with respect and reverence. A totemic animal of many Northern peoples, it serves as a symbol of the connection between heaven and earth.

At home, the bear will act as a guard guarding the hearth from negativity, anger of envious people, will help protect an apartment or a mansion from thieves. Therefore, it is best to put a larger statue near the front door or smaller-on the window. At the same time, he must “look” outside. In no case can it be deployed in the direction of the entrance to the house or from the street.

How is made the shungite figurine bear with balalaika

The shungite figurine bear with balalaika in our store are made of 70% shungite stone and 30% magnesite. Shungite has the ability to absorb and neutralize EMF. In addition, it helps to fight geopathogenic phenomena. Magnesite is a completely natural material. It’s designed to give the desired shape for Shungite. All figurines is installed on the stand. The stand is made of a single piece of 100% shungite stone. 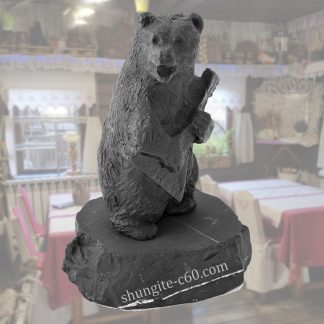