The big unpolished shungite pyramid 100mm from Russia are made of a single piece of genuine 100% Shungite stone. The size is specified for the base of the pyramid.

On our shungite site, the Big shungite pyramid for EMF protection from Russia is presented with a base size of 10 cm or 3.94 inches. Each the item is carved from a single monolithic piece of 100% shungite stone. We make each unpolished shungite pyramid 100mm manually. This is not a plastic or polymer product, obtained by curing in a mold.
Please note that due to the fact that the pyramids are hand carved, their sizes may vary slightly. For example, for the base of a shungite pyramid 100mm, these figures can be in the range from 95mm to 105mm. It makes each product unique and individual. Therefore, we can safely assume that it is no longer possible to find a second exactly the same pyramid.

We made each Big unpolished shungite pyramid for EMF protection by hand at our production facility in the Republic of Karelia (Russia). A karelian shungite pyramid made from a single piece of real 100% shungite mineral. This Shungite stone is mined at the world’s only Zazhoginsky shungite deposit in Karelia, Russia. We guarantee the authenticity of our products.

We make pyramids of different sizes and shape.

How big shungite pyramids are made.

The fact is that it is actually quite difficult for a master stone carver to carve a large shungite pyramid for emf protection. Because large size pyramids are very difficult to manufacture. This is due to the fact that large internal stresses are formed in shungite stone if the products are large. After all, shungite contains a large amount of carbon, so large items are very labor-intensive to produce.

Therefore, we are forced to more carefully select and sort products with defects. Therefore, large pyramids have a higher price than other pyramids. Please note that small cracks on the surface of a large shungite pyramid are not a defect. These cracks usually form where there are barely visible streaks of pyrite or quartz. This is a natural feature of natural shungite stone.

Shungite gets your hands dirty

Also, a feature of an unpolished shungite pyramid is that shungite dust may be present on its surface. These are the remains of shungite dust after mining. And you can stain your hands or the surfaces around it. Therefore, if the shungite pyramid gets dirty, then wipe it with a soft damp cloth. Or rinse under running water at room temperature. Don’t rub the pyramid hard, it doesn’t make sense.

Please note, if you received a pyramid from a cold street, then first leave it at home. Bring to room temperature. After all, if you put a cold pyramid under warm water, then due to the difference in the internal stresses of the pyramid (inside and outside), it can crack. The same thing works vice versa if you put a warm pyramid under cold water.

Natural inclusions in shungite stone are quartz and pyrite.

Please note that on an unpolished shungite pyramid, natural inclusions of quartz and pyrite will be more noticeable. These include stripes, wreaths, spots and dots in the pattern of black shungite stone.
These are traces of natural minerals quartz and pyrite, which got into the mineral shungite in a small amount during the long formation of shungite. But the mineral shungite is very ancient, it was formed more than 2 billion years ago.

A well-known scientific fact says that shungite is an amazing mineral, a distinctive feature of which is the ability to ability to absorb dangerous waves that can have a negative impact on humans and animals. It is also known that each geometric figure is endowed with its own energy. The shungite pyramid combines these two phenomena.

In addition to the fact that real shungite is able to protect against EMF radiation, the geometric shape of the shungite pyramid itself also helps. After all, the geometric triangular shape of the Pyramid of Cheops also contributes to the absorption of waves. And we make the proportions of the shungite pyramids in accordance with the pyramids of Cheops.
In turn, already in 2018, scientists found that the non-hollow limestone pyramid of Cheops is capable of focusing electromagnetic waves at its base. Therefore, the use of a shungite pyramid for protection against electromagnetic fields is really justified. And the larger the pyramid, the more powerfully it concentrates the waves at its base.

In fact, the unique ability of shungite to absorb harmful high-frequency waves works in any shungite object. After all, scientists conducted research on shungite stone of very small thickness. They literally ground shungite into powder and smeared it with a very thin layer.
The thickness of this layer was less than a human hair. And they proved the amazing ability of shungite to absorb and scatter electromagnetic waves of high frequency, which are so harmful to humans and animals.

You can use the shungite pyramid in such a way as to place it near sources of dangerous electromagnetic waves. These include computer monitor screens, Wi-Fi routers, a microwave oven, and other sources.

What else does Shungite pyramid use for?

Also, these geometric shapes of natural rare stone can be used for energy charging and activation of water. As follows from public recommendations for this purpose it is enough to place a pyramid in a vessel with water for 1-2 hours. For water purification, it is hardly suitable. Especially when it comes to polished surfaces.
This surface is devoid of sorption properties and does not absorb harmful impurities from the water. In addition, the surface of the pyramid is extremely small for contact with water. For these purposes, it is better to use natural raw shungite water stones.

In conclusion, it should be noted that all the shungite pyramids that are sold in our store are made from natural shungite stone. We previously shipped via airmail from Russia, and currently we use a transit warehouse in the USA, so you can receive your order as quickly as possible. You can always see the shipping cost in your cart before you pay for your order.

Be the first to review “Shungite Pyramid 100 mm / 3.94 inches with a unpolished surface” Cancel reply 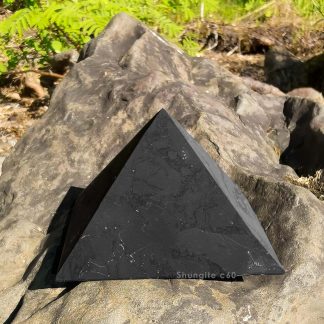