This shungite crystal pyramid Eye of Horus size of 50mm/1.97 in is made of a solid piece of genuine Shungite stone. The size is specified for the base of the pyramid. The drawing  is engraved deep enough in the pyramid, so it does not wear off over time.

On our shungite website we present shungite pyramid Eye of Horus size of 50mm / 1.97 inches for base. Each the item is carved from a single monolithic piece of real shungite stone. We make each pyramid manually. This is not a plastic or polymer product, obtained by curing in a mold. As a result, each of our shungite pyramid with engraved has a unique size and weight even if they are in the same size segment.
For example, a group of shungite stone pyramids from a segment measuring 4 centimeters at the base can have size of the base from 3.7 to 4.3 centimeters. It makes each product unique and individual. You can safely assume that this sortovoi of the pyramid is no longer anybody.

In our shop next forms shungite pyramids are presented.

Raw natural shungite has a rich black color. Rough to the touch surface. Gets his hands dirty, leaves black marks like coal. This is the result of the dust that is on this raw stone. After the pyramid is cut from a single piece of stone, its surface undergoes primary processing. Next, the surface of the shungite pyramid becomes matte and does not have such a rich black color, because part of the light begins to reflect from its surface.

The polished surface of the shungite pyramid Eye of Horus has a rich black deep color. Its surface perfectly reflects the daylight, if you turn the pyramid at a certain angle. On such a surface traces of pyrite and quartzite are poorly visible, but still you can distinguish and see them. Just find the correct angle of light reflection on its surface. It should also be noted that both types of shungite surface are electrically conductive.

A well-known scientific fact says that shungite is an amazing mineral, a distinctive feature of which is the ability to absorb dangerous EMF waves that can have a negative impact on humans and animals. It is also known that each geometric figure is endowed with its own energy. The shungite pyramid combines these two phenomena. The shungite pyramid Eye of Horus gives a special energy boosting effect.

Usually recommended the shungite pyramid Eye of Horus classical shape sizes from 5 to 10 centimeters. These dimensions are for the base and not the height of the product. Also, these geometric shapes of natural rare stone can be used for energy charging and activation of water. As follows from public recommendations for this purpose it is enough to place a pyramid in a vessel with water for 1-2 hours.
For water purification, it is hardly suitable. Especially when it comes to polished surfaces. This surface is devoid of sorption properties and does not absorb harmful impurities from the water. In addition, the surface of the pyramid is extremely small for contact with water. For these purposes, it is better to use natural raw shungite water stones.

The sign of Eye of Horus on a shungite pyramid

Wadget is an ancient Egyptian symbol, the left Hawkeye of the God Horus, who was knocked out in his fight with Set. The right Eye of Horus symbolized the sun, and the left eye – the Moon, its damage was explained by the phases of the Moon. This eye, healed by the god Thoth, became a powerful amulet worn by the pharaohs. He personified various aspects of the divine world order, from royal power to fertility. This is how the left eye of Horus became the symbol of healing and protection on shungite pyramid engraved.

In conclusion, it should be noted that each the shungite pyramid Eye of Horus in our store are made of genuine shungite stone. We previously shipped via airmail from Russia, and currently we use a transit warehouse in the USA, so you can receive your order as quickly as possible. You can always see the shipping cost in your cart before you pay for your order. 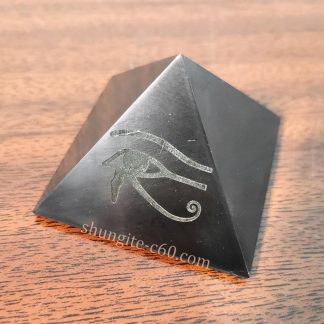