The symbol of the shungite seven point star necklace is one of the most ancient sacred. At the same time, he has a powerful protective energy. The diameter of the Septagram black stone necklace is about 35 mm/1.37 ” or 45 mm /1.77 ”.

This shungite necklace septagram is made from a single piece of rare natural shungite stone. Shungite is one of the rarest and most amazing minerals on earth. Shungite has the ability to absorb and emf protection. In addition, it helps to fight geopathogenic phenomena. The picture Septagram (or Heptagram) is applied by engraving. This pattern  will not be erased and will be visible for a very long time. Shungite engraved shungite heptagram necklace and pendants in our store are unique and nonrepeating. In addition, each of this amulet made by hand.
The shungite eight point star necklaceis a natural or man-made object designed to protect people from harm and misfortune. Moreover, each septagram black stone pendant has its own energy.

The history of the Seven Pointed Star symbol.

The Seven Pointed Star or Elven star symbol, as current researchers suggest, originated during the time of Ancient Babylon, the Sumerians. Also, the Seven Pointed Star symbol was used by the ancient Egyptians, as well as in ancient India. Yes, in fact, speaking, the Zoroastrians knew about this star and associated with it the symbolism and manifestation of the actions of the Septener planets. In turn, these are seven planets that have been used by astrologers since antiquity. That is, it is the Sun, Moon, Mercury, Venus, Mars, Jupiter, Saturn.

Thus, the Seven Pointed Star of the Magicians gives us a decoding of the seven-day week, which has come down to us from ancient times. After all, each of the days of the week was associated with the patronage of one of the Septener planets. Also, the seven-day week was also associated with one of the phases of the moon, lasting about seven days.
This seven-pointed star is also associated with great cycles, with the symbolic rhythm of human history.
Currently, magicians and witches use this magical symbol on a shungite septagram (or heptagram) to carry out their rituals.
In conclusion, we see the magical seven in nature. Therefore, scientists and researchers realized that the sevenfold cycle is not a human creation, but a process that absolutely objectively exists in nature.

What can a Shungite septagram necklace bring to its owner? In this case, the pendant performs not only the functions of a stylish accessory, but also the role of an amulet, which has a huge impact on the fate of the person wearing it. At all times, people have worn talismans with one purpose – to protect against evil forces and attract good energy.

The shungite necklace septagram an amulet is an energy-intensive sign that, like water, absorbs the energy of words and emotions of people. Usually it should be worn around the neck, in the chest area. This is how the sign collects the most energy. In addition, the pendant can serve as an energy shield for the wizard, although it protects only from weak emotional waves. As well as, the magical power of the shungite heptagram necklace helps to improve mood, concentrate thought, purify and strengthen the human aura.

Thus, the shungite septagram black stone necklace instills confidence and courage in the face of troubles, protects against the forces of evil. Therefore, magicians use this symbol this symbol in elemental magic in the conjunction “magician-symbol-element”.

We make each shungite seven point star pendant from monolithic piece of real shungite stone, whose age is more than two billion years. This is one of the rarest and most unusual minerals on earth, it has the ability to absorb and protect against EMF. In addition, it helps to combat geopathogenic phenomena.
To a small extent, the black rock includes quartz and pyrite. They give the surface of finished goods a unique pattern with their white and gold colors. Sometimes there are small voids in the structure of these neighboring rocks. They look like very little dimples in quartz and pyrite stripes on shungite.

We use only natural shungite stone in production, so we cannot perfectly smooth the surface. And on the shungite heptagram necklace there are minor traces of machining.
Of course, someone makes perfectly smooth pendants, but only from some synthetic material. To do this, they simply fill in the form of epoxy resin, plastics and other polymers.
But our craftsmen carve products by hand from solid raw rock, and then polish from all sides. In the photos, you may notice slight irregularities at the edges. In turn, they appear as a result of the physical cutting of the stone.

The master then polishes these tiny cuts while working on the entire workpiece. As a result, we get an organic shape of an shungite seven point star necklace on stone made of rare rock.
An shungite necklace septagram made of true shungite will help to be in harmony with your body and spirit, to find inner unity.

Be the first to review “Shungite septagram necklace” Cancel reply 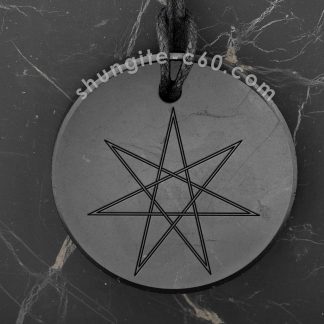