Yin-Yang, In ancient Chinese mythology and natural philosophy (“tai Chi”, the Great Limit) is a symbol of the creative unity of opposites in the Universe. The shungite necklace Yin and Yang made of 100% real shungite stone.

This Yin Yang Pendant is made from a single piece of rare genuine shungite stone. Shungite is one of the rarest and most amazing minerals on earth. Shungite has the ability to absorb and emf protection. In addition, it helps to fight geopathogenic phenomena. The picture on a shungite necklace Yin and Yang is applied by engraving.
This pattern will not be erased and will be visible for a very long time.

Shungite engraved amulets and EMF protection shungite necklace Yin and Yang in our store are unique and nonrepeating. In addition, each of this amulet made by hand.
Amulet is a natural or man-made object designed to protect people from harm and misfortune. Moreover, each amulet has its own energy.

All of our pendants and necklaces are cut only by hand from a single piece of shungite. These are not factory-stamped forms. In this regard, each shungite pendant Yin and Yang has a unique size and weight.

Yin Yang originates in the philosophy of ancient China. Initially, he was identified with the mountain. After all, one of its halves is always illuminated by the sun, and the other at the same time is in the shade. Sooner or later these parts change places.
With the development of the universe, the original meaning of the symbol was transformed. Yin and Yang is the prototype of light and dark, hard and soft. Later, other opposites are added, such as heat and cold, light and shadow, and others.

However always have in view contrast to.
We depicted this ancient sign on a black stone necklace framed by the sun. Thus, such an engraving of a symbol illustrates the dualism of the most basic phenomena light and darkness.
Therefore, the struggle of opposites energizes the shungite pendant yin and yang. And when their confrontation reaches the limit, then harmony will come in the soul.

Features of the production of the shungite Yin and Yang pendant

We make each Yin Yang Pendant from monolithic piece of real shungite stone, whose age is more than two billion years. This is one of the rarest and most unusual minerals on earth, it has the ability to absorb and protect against EMF and 5g. In addition, it helps to combat geopathogenic phenomena.
To a small extent, the black rock includes quartz and pyrite. They give the surface of finished goods a unique pattern with their white and gold colors. Sometimes there are small voids in the structure of these neighboring rocks. They look like very little dimples in quartz and pyrite stripes on shungite.

The master then polishes these tiny cuts while working on the entire workpiece. As a result, we get an organic shape of an Yin Yang Pendant on stone made of rare rock.
An EMF protection shungite necklace Yin and Yang made of true shungite will help to be in harmony with your body and spirit, to find inner unity.

Other engraving options with personalized drawing for shungite stone pendants.

To all other, we have shungite stickers for your phone with the image of this simbol of Yin and Yang, as well as round plates with or without a magnet.

More pendants and other products from real shungite stone are presented in our shungite store.

1 review for Shungite pendant Yin and Yang сreation and unity 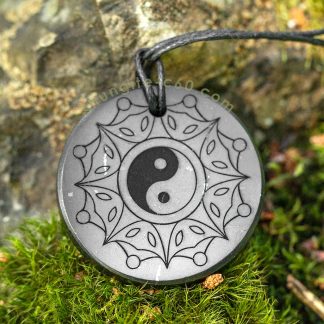