Shungite set stemware Flower of Life with a stand

The shungite water cup in our store are made of 100% real shungite stone. Each shungite cup Flower of Life is made of a single whole piece of Shungite stone. The inner surface of shungite drink glass cups is unpolished. The outer surface shungite shotglass is polished. The shungite drinking water cups of shungite stand on a hexagonal stand, which is also included in this set.
This hexagon-shaped stand has an impressive size and weight about of 1.2 kg / 2.64 Lbs., which can positively affect the protection against EMF in your home.
Shungite is a mineral that has an amazing ability to absorb and neutralize high frequency electromagnetic waves. In other words, it is EMF protection created by nature. This fact has scientific proof.

We make a shungite drinking water cup by hand from a solid shungite stone. Initially, the shungite mug is unpolished. We then polish the outside of the shungite stack to create a pleasant shine. Due to the unique pattern of natural black stone, each shungite mug has a unique pattern. This is a very laborious work with shungite stone, which you will not find anywhere else.
A truly unique shungite cup made by hand to the highest standards. Therefore, it will be a wonderful gift for a loved one, as well as a unusual accessory in your kitchen for shungite charged water.

In the course of world research it was found that Shungite from the Republic of Karelia, has amazing abilities. Firstly, it’s able to neutralize electromagnetic waves of high frequency. Secondly, have ability sorption properties and mineralization. It also has bactericidal properties. Shungite for water have become possible due to the porous structure of the stone and unique of carbon C60. Such a carbon is called Fullerenes. Please note that only genuine Shungite from the Republic of Karelia has such abilities, Shungite from other regions is useless or is a fake of this amazing and rare mineral. The composition of genuine shungite includes two main minerals: Pyrite and Quartz. Therefore, you will see corresponding whitish and golden veins on the surface of shungite water cup. Pyrite, in long-term contact with the same water can give a small rust.

We make shungite utensils from shungite stone without using any extraneous components. We use completely natural and solid shungite stone from which the shungite mug is cut. Therefore, shungite dishes are absolutely safe and environmentally friendly. Such a shungite drinking water cup will become not just a dish for receiving shungite charged water, but a real center of attraction in your kitchen. 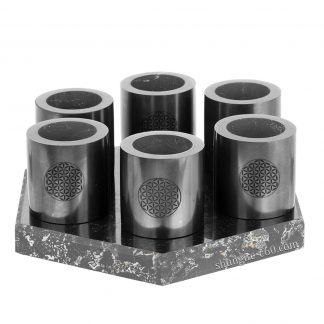 You're viewing: Shungite set stemware Flower of Life with a stand 250.00 $
Add to cart