You get exactly the sample real shungite stone from Russia of 1 type that you see in the photo.

This sample has a natural crack along the edge, it is located near the edge. Therefore, it is possible that part of the sample may move away from the main stone along this crack. Please pay attention to this. In case this happens, this nugget will not become much smaller.

Please note that the size and weight of each sample of raw elite shungite stone is approximate and may vary slightly.

Where was the real elite shungite born?

A real shungite from Russia is a stone born only in Karelia (a region in Russia). This rare ancient stone is called shungite, but only the mineral shungite from Karelia can bear this name. There are several types of shungite in the Russian region of Karelia. All of them differ from each other primarily in the amount of carbon, as well as in chemical composition.

What color is the real elite shungite from Russia?

Real shungite from Russia (Karelia) type of 1 has a black color. You will say that this is not the case. After all, a real elite shungite stone has a silver color. In this case, you will be right and wrong at the same time. In the scientific environment, the color of this shungite of the first type is black.
But, geologists add that the color of such shungite is black with a sheen. This luster is usually a strong metallic or diamond. Therefore, when you look at elite shungite under illumination, light is reflected from it. As a result, it also looks silver to your eye.

How to distinguish elite shungite from black shungite?

Also, shungite of the third type has no gloss, it is matte. However, we produce shungite products from shungite of the third type and can polish them. In this case our shungite products will have a shine. But this brilliance is not comparable to the brilliance of elite shungite. And, for example, polished shungite sphere will have a rich deep black color with a bright black shiny surface.
Their black luster will have nothing to do with the metallic luster of raw elite shungite.

Are there elite shungite spheres and pyramids?

Features of the appearance of the original elite shungite stone.

Elite stone shungite consists almost entirely of a special form of amorphous carbon. At the same time, over time and in the process of formation, minerals such as quartz and pyrite were added to the elite shungite. The mineral quartz can fill cracks in shungite together with pyrite.

Real elite shungite in large nuggets usually has microcracks, they may be barely noticeable or more noticeable. This is due to the specifics of the elite mineral shungite with the highest carbon content up to 98%. However, they do not affect the integrity of the mineral, which does not negate its certain fragility. Therefore, shungite samples should be handled carefully. Do not allow it to fall or hit hard, so that the sample does not split. 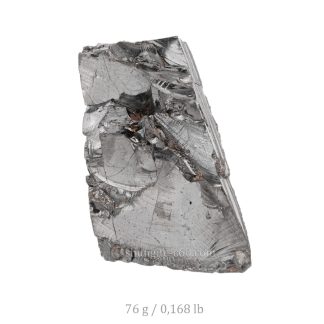