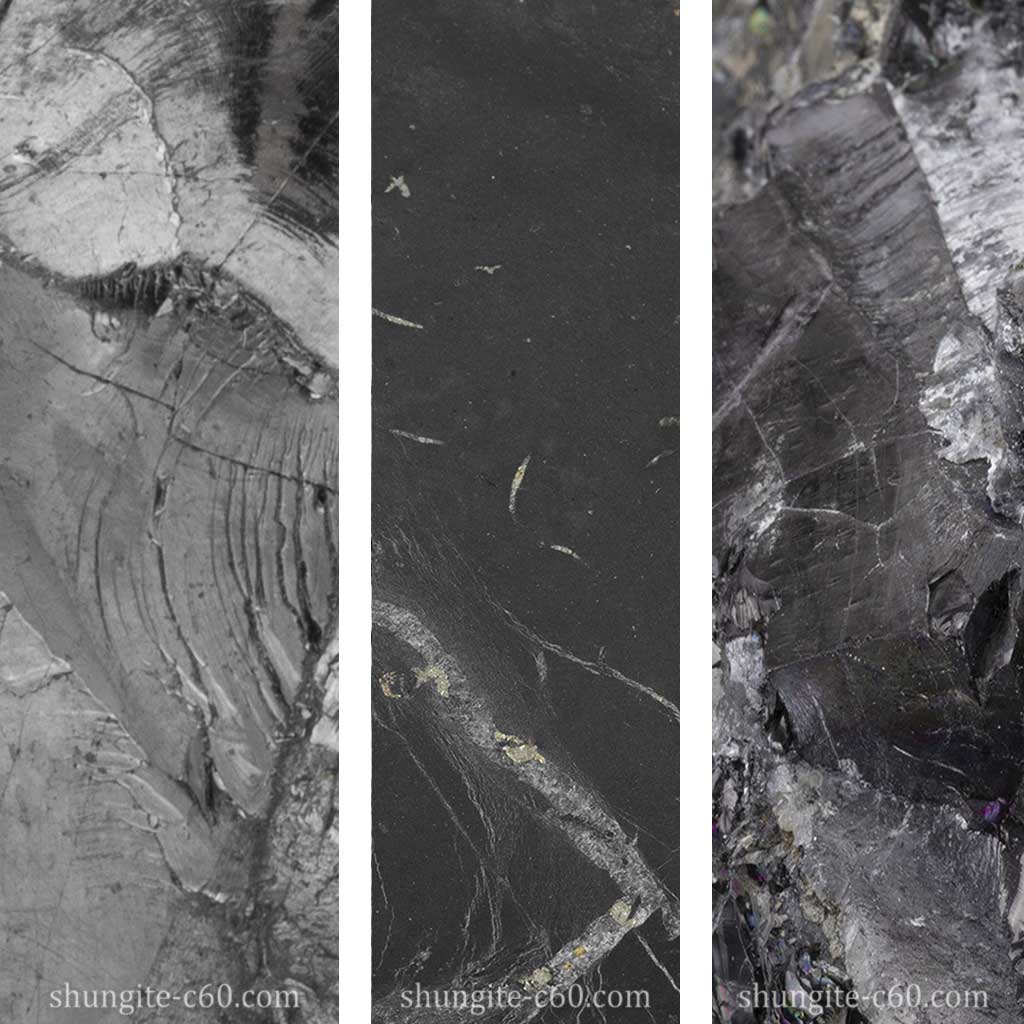 Shungite rocks is a scientific definition

Shungite is fullerene, not graphite, carbonaceous matter. The main unit of the supramolecular structure of the carbonaceous substance of shungite rocks is a globule – a fullerene-like formation of the order of 10 nm in size. Which is a 3-dimensional closed shell, and in General, consists of fragments of such shells or smoothly curved packages of carbon layers covering a nanoscale pore.

The molecular structure of a carbonaceous substance is characterized by a graphite-like structural motif that is distorted both in the plane of the layer and perpendicular to it in such a way that the hexagonal symmetry of the motif decreases to a trigonal one. At the same time, periodicity violations in graphene layers can be caused by non-carbon inclusions and the presence of non-hexagonal carbon rings.

Higher fullerenes and fullerene-like structures, both isolated and associated with minerals, were found in the carbonaceous matter of shungite rocks.
A carbonaceous substance with a pronounced structural anisotropy shows a significant increase in diamagnetism at low temperatures, characteristic of doped fullerites.

For the carbonaceous matter of shungite rocks, a number of signs of volcanogenic or deep Genesis have been established.

Initially, the term shungite rocks or simply shungites was introduced by a Foreign scientist A. A. in 1878 after the name of the Zaonezhsky village of Shunga. The scientific researcher A. A. Inostrantsev determined that shungite is an extreme type of natural carbon that is not coal.

On the contrary, the Russian researcher Timofeev concluded that shungite is a bituminous coal similar to anthraxolite. Other researchers also had their own assumptions and definitions. For example, a Rankama researcher suggested that shungite of the I variety may be the result of carbonation of a hydrocarbon.
According to the beliefs of Galdabini and Kalinin, schungites are the result of carbonization products of active mantle degassing. Berezkina – the consequence of deep processes of combustion.

Some other geologists believe that shungite is the end product of bitumen development. As can be seen from history, many assumptions and theories were put forward by scientific researchers and geologists, but only after many years was an accurate definition given.

What are Shungite rocks?

Shungite rocks are carbon-mineral composite materials with micro and nanodisperse distribution and characteristic morphology of mineral and carbon components. In addition, as a result of these processes, a number of microfossils were detected in rocks using electron microscopy, the substance of which can be represented by mineralized or carbonaceous (non-crystalline) matter.

Shungite rocks form a large group of carbonaceous volcanogenic-sedimentary Precambrian rocks of Karelia. The carbonaceous matter of shungite rocks is one of the most intriguing types of free carbon, which has given rise to a variety of views on its origin.

Shungite rocks are natural composite materials that contain carbon (from 1 to 99%) and minerals: quartz, mica, and carbonates. In addition, it contains a small amount of sulfides and other minerals.

Depending on the carbon content shungite rocks according to the classification of researcher geologist p. A. Borisov are divided into 5 types:

Each type of shungite stone has its own external distinctive features. The most practically important is type 3. The fact is that a wide range of applications has been identified for this type of shungite. Practical orientation is reflected in the geological and industrial classification, shungite, developed by Russian scientist – Yu. K. Kalinin.

To date, it has been proved that shungite rocks are an important industrial raw material. In particular, as part of solving environmental problems, the prospects of shungite sorbents for water purification from organic and inorganic substances are shown. In addition, shungite rocks are able to extract a wide range of organic substances from the waste water of pulp and paper production, such as phenol, oleic acid, amyl alcohol, and substances of the lignocarbon complex of wood and peat hydrolysates. As well as, water-soluble resins, thermolysis tsellolignina and wood.

Good results were obtained when using shungite stone type 3 for cleaning industrial effluents from petroleum products. First of all, it should be noted that water treatment with shungite was more effective than chlorine treatment, coagulation and electrochemical treatment. Shungite stone has antibacterial properties. As a result, the degree of purification was achieved to the standards of water discharge to fisheries reservoirs.

In addition, shungite rocks are used for the needs of the chemical industry and metallurgy, as well as in the construction of special facilities that are able to absorb electromagnetic waves.

There are several main ways to research. This EMP as well as microdiffraction study of shungite rocks.
These studies differ in geochemical parameters and geological features. But both studies show, on the one hand, the similarity of shungites in the presence of curved packages of graphene layers. But on the other hand, it revealed differences in the type and distribution of carbon, as well as in the variety of types and sizes of mineral base crystals.

Shungite rocks are natural carbon-mineral composite materials, the carbonaceous substance of which can form a matrix, concentrate in large isolated clusters, form films on the surface of crystals and three-dimensional mesh morphostructures.
The supramolecular structure of carbonaceous matter changes from globular to renal, scaly, and film-like with the formation of clusters, lamellae, layers, polyhedra, and hollow fulleroid shells.

Rock-forming minerals, quartz, mica, chlorite, albite, amphibole and pyrite are characterized by varying morphology (from well-cut and with traces of cut to rounded and shapeless) and sizes from tens to fractions of a micron in various rocks.

In contrast, trace Elements (si, Zn, Co, Ni, Cr, V, Mo, Pb, S, As, Se, etc.) are associated with accessory, mainly sulfide minerals. Among them are pyrite, violarite, chalcopyrite, sphalerite, millerite and others, as well as layered silicates-roscoelite and paragonite.

Accessory microcrystals with a certain elemental composition have a characteristic shape and structure, which, apparently, reflects the specifics of their accumulation. For example, microcrystals with a predominant content of Fe, Ti, Ni, and V are distributed fairly evenly in the carbon matrix, often in Association with complex aluminosilicates, and are usually single-crystal, often rounded or with weak traces of cut.

In contrast, as, Nb, Sb, and BA containing inclusions are represented as polycrystalline aggregates of various shapes.
High-resolution electron microscopy has shown that non-carbon inclusions are represented in shungites not only in the form of micro and nanocrystals,but also in the form of atomic monolayers up to 100 nm long, intercalating carbon. In this case, the interlayer distance (002) increases from 0.34 to 0.6 nm. Nanoscale clusters of non-carbon elements are detected by increased contrast in the plane of the carbon layer and have dimensions within a nanometer.

In General, nanodisperse types of inclusions of non-carbon elements indicate that elemental-organic compounds may have participated in the formation of shungite carbon.

Simultaneously with the industrial synthesis of fullerenes, the task of searching for their natural analogues arose. The first object in which fullerenes were found was the shungite rocks of Karelia (Russia).

Above all, the presence of fullerenes has been found in many rocks, for example, in fulgurite from Florida (USA) and in carbonaceous rocks of the Onaping formation (Canada). However, according to some estimates, the simplest fullerenes make up only a small fraction of the family of carbon clusters and their derivatives. Therefore, by analogy with graphite and diamond-like structures, it can be assumed that there are also non-crystalline fullerene-like carbons in nature that have structural features and properties of fullerenes and their derivatives.

The current understanding of the structural state of fullerene-like forms of carbon and their relationship to Genesis is very uncertain. Published papers present often contradictory results about the conditions of their synthesis and structure.

In addition, there is no consensus about the origin of the fullerenes found in various rocks. This situation is caused both by problems in analyzing fullerenes and by the fact that natural non-crystalline carbon matter is much more complex than its crystalline forms.

Modern approaches to the study of mineral raw materials, including carbon-containing rocks, are based on the search for fundamentally new areas of use, especially in high-tech technologies that give the greatest economic effect.

Shungite rocks that are unique in their Genesis, mineral composition, and carbonaceous matter manifestations are promising in this regard. Their properties are determined by the structure, carbon distribution, and nature of polymineral structure formation. The study of these features at the micro and nanoscale can contribute not only to solving the fundamental problem of the evolution of carbonaceous matter, but also to the development of new directions for the practical use of carbon-containing rocks.