We make shungite bricks from a solid slab of shungite stone. Then we grind it, so the surface of the stone looks smooth and pleasant to the touch. But we do not polish the shungite brick so that it looks like a mirror. Therefore, this shungite block has an unpolished surface.

The surface type does not affect the ability of shungite brick.

Shungite brick and quartz and pyrite.

Real shungite stone from Karelia contains quartz and pyrite. In turn, these two minerals are white and yellow. Therefore, white and yellow veins of quartz and pyrite appear on the surface of the shungite stone. In this case, quartz can be in the form of specks, as shown in our photo. Also, the mineral pyrite of yellow or golden color can make some small pits on the surface of shungite. Thus, you will get in each case a unique texture of shungite bricks.

As follows from the Chinese teachings of Feng Shui, each geometric shape has its own energy, as well as the material from which it is made. For example the shape of the cube as a completeness, stability, static perfection, immaculate law. We have tried to combine these two energies in one product. For example, in a Pyramid, cube or sphere. You can choose a geometric shape according to your preference. Usually, pyramids and cubes are placed next to EMF sources, such as computer monitors or next to laptops. Since shungite stone has the ability to absorb electromagnetic waves.

Please note that all our Shungite brick made by hand. Therefore, the size and weight of each product may vary slightly.

If you have any questions, or are you interested in other size of this product, please feel free to contact us.

Be the first to review “Shungite brick” Cancel reply 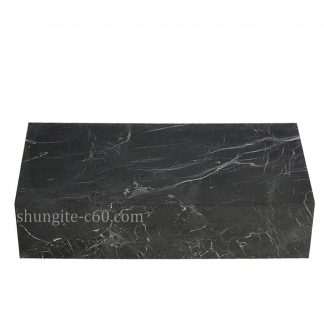