Contemplating this shungite mandala, your spirit will ask you to stop worrying excessively and free up your imagination. One has only to push off from the surface of his subconscious to find his true purpose and way of life. Follow what you like, not what you’re afraid of.

Shungite pendant mandala Imagination, help a person to overcome psychological barriers, as well as to concentrate all internal energy to achieve the desired result or his own goal.

The modern world envelops a person like a swamp, it does not allow a person to move easily and confidently in the way that he wants. Even the most powerful desires and aspirations can not be translated into reality because of the factors that influence us from the specifics of the modern world order.

Firstly, shungite pendant mandala Imagination is made of natural Karelian shungite stone. Secondly, a master makes each pendant individually by hand. The activator pattern is applied by engraving on the surface of the shungite pendant. As a result, this drawing has a strong texture and will not be erased over time.

Shape and surface of the shungite manadala

Each activator has a shungite mandala and a geometric sacred closed system in the form of circles and lines. Above all, the images are not random and have a certain energy that is used in Buddhist practice.

Laziness, self-doubt, feelings of fear, distrust, and other internal barriers affect us by every day. All these negative factors suppress our internal energy and motivation. But our personality can overcome all this. Shungite activator – Mandala, will help you find your inner hidden energy and focus on it to activate it.

Perhaps, the Shungite pendant mandala Imagination mandala one of these activators is the one that you need. In addition, you can find other activators of your undisclosed potentials and aspirations in this section.

Be the first to review “Shungite mandala “Imagination”” Cancel reply 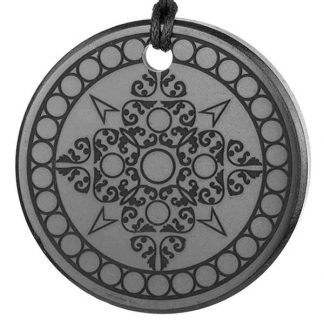