This four leaf clover necklace is made from a single piece of rare natural shungite stone. Shungite is one of the rarest and most amazing minerals on earth. Shungite has the ability to absorb and emf protection. In addition, it helps to fight geopathogenic phenomena. The picture is applied by engraving. This pattern on a four leaf clover necklace black shungite stone will not be erased and will be visible for a very long time.
Shungite engraved amulets and pendants in our store are unique and nonrepeating. In addition, each of this amulet made by hand. Amulet black 4 leaf clover necklace is a natural or man-made object designed to protect people from harm and misfortune. Moreover, each amulet has its own energy.

Four leaf clover amulet truly a wonderful plant! This plant symbolizes blessed luck in everything, impressive success in all things. Is considered, initially leaf clover emerged on earth thanks to Eva. She took this wonderful leaf with her when she and Adam, God banished her from Paradise.
And since this plant grew in the gardens of Paradise, then its appearance in the garden of man, is considered an omen of good luck, success and happiness.

Especially if you get a four-leaf clover, this is an application for 100 percent luck in all cases. Since then, the clover leaf has been conquering the world.
Images of this wonderful leaf are found in ancient manuscripts and papyri, its leaves or images have been used and are used in rituals and magical actions, as talismans, charms or amulets, and even as details of the logos of companies or organizations.

We make each four leaf clover necklace from monolithic piece of real shungite stone, whose age is more than two billion years. This is one of the rarest and most unusual minerals on earth, it has the ability to absorb and protect against EMF. In addition, it helps to combat geopathogenic phenomena.
To a small extent, the black rock includes quartz and pyrite. They give the surface of finished goods a unique pattern with their white and gold colors. Sometimes there are small voids in the structure of these neighboring rocks. They look like very little dimples in quartz and pyrite stripes on shungite.

We use only natural shungite stone in production, so we cannot perfectly smooth the surface. And on the shungite pendant Four Leaf Clover there are minor traces of machining.
Of course, someone makes perfectly smooth pendants, but only from some synthetic material. To do this, they simply fill in the form of epoxy resin, plastics and other polymers.
But our craftsmen carve products by hand from solid raw rock, and then polish from all sides. In the photographs, you may notice slight irregularities at the edges that appear as a result of physical cutting of the stone. 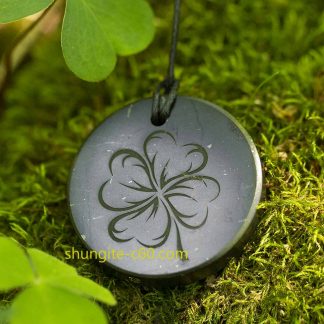