The shungite black crystal necklace has the shape of a hexagonal crystal, length ~1.57 inches / 4 centimeters, width ~0.39 inches/ 1 centimeter, weight of the pendant is about 8 grams. The pendant is topped with a metal fastener, and a polyester string for the pendant is also included. Each shungite necklace Crystal has a unique surface in the form of inclusions of Pyrite and Quartz. Pyrite has a Golden color. Quartz has a whitish color. These two minerals are an integral part of the real Shungite stone. As a result each amulet is unique and has no repetitions.

This shungite crystals necklace is made from a single piece of rare natural shungite stone. This black stone is one of the rarest and most amazing minerals on earth. Shungite has the ability to absorb and emf protection. In addition, it helps to fight geopathogenic phenomena. The shungite black crystal necklace made of shungite stone of unusual shape is made in the form of the hexagonal crystal pendant. Also, the shungite crystal pendant has a metal fastener through which we can thread a string or chain. Each shungite shungite crystals necklace is made separately from the others by hand. As a result, no pendant is exactly like another.
A Pendant is a natural or man-made object designed to protect people from harm and misfortune. Moreover, each item has its own energy.

We have made a pendant of shungite stone in the form of a crystal. As you know, crystals are hexagonal pseudohexagonal prisms, crowned at one end with a hexagonal or trihedral pyramidal head. This is how, for example, quartz crystals look. However, shungite mineral does not have a crystalline structure, it consists of carbon molecules of a special amorphous form. In turn, they are sputtered into a quartz matrix. These carbon molecules have a special structure that has no analogues in the world, therefore they have a special name – shungite (or shungite substance).

As is known, molecules of fullerene c60 were first discovered in shungite. In addition, it has been scientifically proven that shungite shungite has pronounced emf protective properties. Therefore, the phrase “shungite crystals” – it is, can be called a beautiful metaphor, and not an accurate description of the structure of this mineral. However, a shungite pendant in the shape of a crystal looks very impressive, and if you call shungite a crystal, there is nothing wrong with that. Let it be a charming black crystal.

We make each shungite crystals necklace from monolithic piece of real stone, whose age is more than two billion years. One of the main distinctive visual features of this rare mineral is the inclusion of pyrite and Quartz on its surface. They give the surface of finished goods a unique pattern with their white and gold colors. Sometimes there are small voids in the structure of these neighboring rocks. They look like very little dimples in quartz and pyrite stripes on shungite.

We use only natural shungite stone in production, so we cannot perfectly smooth the surface. And on the shungite amulets there are minor traces of machining.
Of course, someone makes perfectly smooth pendants, but only from some synthetic material. To do this, they simply fill in the form of epoxy resin, plastics and other polymers.
But our craftsmen carve products by hand from solid raw rock, and then polish from all sides. In the photographs, you may notice slight irregularities at the edges that appear as a result of physical cutting of the stone. The master then polishes these tiny cuts while working on the entire workpiece. As a result, we get an organic shape of an shungite black crystal necklace made of rare rock.

The shungite shungite crystals necklace made of true shungite will help to be in harmony with your body. Also will give you new strength and confidence to achieve the desired result.

Be the first to review “Shungite pendant Crystal” Cancel reply 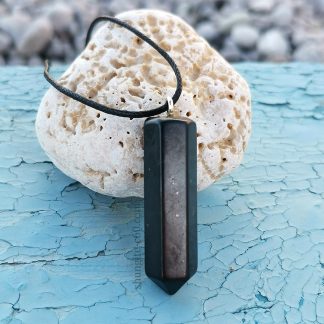