The size of shungite magical stone circle ~50 mm/1.97″ or 70 mm/2.76″, thickness ~ 5 mm/0.19″. The pattern Pentacle is applied by engraving. If you would like to have your personal drawing on this shungite plate, please contact us.

Each shungite pentacle altar tile is unique, as is its owner. The magical shungite altar reflects our spirituality and mental state. It can be a personal sacred place where we leave everything worldly behind in order to get in touch with the mystical world. An shungite pentacle altar is a place where religious ceremonies are held and offerings are made to a deity or deities. The shungite stone altar has an ancient connection with the Goddess and Mother Earth, who rules the wheel of birth-death-rebirth.

How to make an shungite pentacle altar tile.

In the meantime, every night or when you are free, you can try your inner spiritual abilities at your shungite pentacle altar tile. For example, look at a candle or into a vessel with water. Meantime on the surface of which some colored ink should be dripped. At the same time, try to hold the various stones that lie on your altar, and let the impressions pass through your fingertips in the form of images, sounds and feelings. This art is called psychometrics, you master it involuntarily.

As you know, we are used to comfort. First of all, these are electrical appliances. After all, they simplify our life and save time. However, most likely you have already thought about the fact that there are too many devices. As a result, hundreds of different EMF waves penetrate us every second. Yes, their intensity is not high enough to directly harm the cells of the body. However, with prolonged exposure of the body to EMF radiation, which also includes 5G radiation, not only thermal consequences arise. Typically, this can have an adverse effect on the cells of the body. But there is a way to reduce the negative impact of electromagnetic fields using shungite pentacle altar tile to protect against EMF and from 5G waves.

Protection against EMF and 5g with shungite stone pentacle plate.

We suggest you choose a shungite emf circle Pentacle size of 50 or 70 millimeters. Alternatively, we can attach a magnetic layer to the disc to adhere the disc to a metal surface. Shungite stone effectively protects against EMF radiation even with a thin thickness in human hair, it is proved by scientific research. However, as the thickness of the material increases, the shielding efficiency increases according to a mathematical progression.

Drawing on a shungite circle pentacle.

At our production facility we make a drawing of the Pentacle on a shungite magical circle. In addition, we have other options for drawings in the online store catalog. If you are interested in an blank shungite disk without or with a magnet, you can also find them in our product catalog.

We produce shungite emf circle from solid shungite stone. Next, we polish the disc on both sides, while the edges of the disc are not polished, but they are smooth to the touch. On the surface of the shungite circle, there may be traces of natural mineral inclusions of shungite, which give a special appearance to the stone. These include quartz and pyrite. Pyrite will appear as golden or yellowish specks or veins. At the same time, on the surface of a shungite product there may be some areas in the form of small pits or holes, as well as grooves in the form of holes. All these are traces of pyrite in shungite.

Each magical shungite emf circle will have a unique pattern. After all, the mineral companions of shungite give the black surface of this stone a unique inimitable pattern. In this case, the greatest contribution is made by quartz, which is white. But on a polished shungite surface, quartz looks like translucent or whitish veins. However, when we engrave shungite, white quartz inclusions can show through in the picture and you will see them. 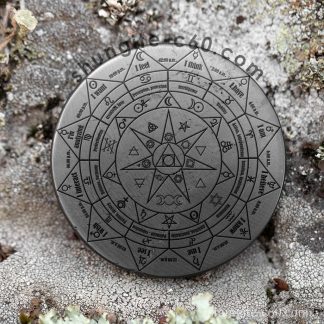