The size of Magical shungite disc septagram  ~50 mm/1.97″ or 70 mm/2.76″, thickness ~ 5 mm/0.19″. The pattern sseven pointed star shungite plate is applied by engraving. If you would like to have your personal drawing on this shungite plate, please contact us.

As you know, we are used to comfort. First of all, these are electrical appliances. After all, they simplify our life and save time. However, most likely you have already thought about the fact that there are too many devices. As a result, hundreds of different EMF waves penetrate us every second. Yes, their intensity is not high enough to directly harm the cells of the body. However, with prolonged exposure of the body to EMF radiation, which also includes 5G radiation, not only thermal consequences arise. Typically, this can have an adverse effect on the cells of the body. But there is a way to reduce the negative impact of electromagnetic fields using shungite plate Septagram to protect against EMF and from 5G waves. Also we have engraved the symbol shungite heptagram plate on a magical shungite disc.

The history of the Seven Pointed Star symbol.

The Seven Pointed Star or Elven star symbol, as current researchers suggest, originated during the time of Ancient Babylon, the Sumerians. Also, the Seven Pointed Star symbol was used by the ancient Egyptians, as well as in ancient India. Yes, in fact, speaking, the Zoroastrians knew about this star and associated with it the symbolism and manifestation of the actions of the Septener planets. In turn, these are seven planets that have been used by astrologers since antiquity. That is, it is the Sun, Moon, Mercury, Venus, Mars, Jupiter, Saturn.

Thus, the Seven Pointed Star of the Magicians gives us a decoding of the seven-day week, which has come down to us from ancient times. After all, each of the days of the week was associated with the patronage of one of the Septener planets. Also, the seven-day week was also associated with one of the phases of the moon, lasting about seven days.
This Seven-Pointed Star is also associated with large cycles, with the symbolic rhythm of human history.
At the present time, the Magic Symbol of shungite septagram (or heptagram) can be used by magicians to carry out their rituals.
In conclusion, the magical seven in nature is observed and exists, regardless of the will of man. Scientists and researchers have now understood that the sevenfold cycle is not a creation invented by man, but a process that is observed in nature completely objectively.

We suggest you choose a shungite tile septagram size of 50 or 70 millimeters. Alternatively, we can attach a magnetic layer to the disc to adhere the disc to a metal surface. Shungite stone effectively protects against EMF radiation even with a thin thickness in human hair, it is proved by scientific research. However, as the thickness of the material increases, the shielding efficiency increases according to a mathematical progression.

At our production facility we make a drawing of the sign Septagram (or Heptagram) on a shungite magical disc. In addition, we have other options for drawings in the online store catalog. If you are interested in an blank shungite disk without or with a magnet, you can also find them in our product catalog.

We produce shungite tile Septagram from solid shungite stone. Next, we polish the disc on both sides, while the edges of the disc are not polished, but they are smooth to the touch. On the surface of the shungite plate septagram, there may be traces of natural mineral inclusions of shungite, which give a special appearance to the stone. These include quartz and pyrite. Pyrite will appear as golden or yellowish specks or veins. At the same time, on the surface of a shungite product there may be some areas in the form of small pits or holes, as well as grooves in the form of holes. All these are traces of pyrite in shungite.

The engraving on a shungite plate of image seven pointed star.

Each Magical shungite disc seven pointed star will have a unique pattern. After all, the mineral companions of shungite give the black surface of this stone a unique inimitable pattern. In this case, the greatest contribution is made by quartz, which is white. But on a polished shungite surface, quartz looks like translucent or whitish veins. However, when we engrave shungite, white quartz inclusions can show through in the picture and you will see them.

Be the first to review “Shungite plate Septagram” Cancel reply 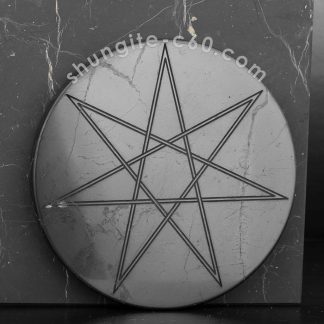