This shungite Stones shown are for illustration as these are natural items please expect some variance from stone to stone. Stones supplied will be very similar but not identical. Posted pictures of shungite stones are to provide an idea of the typical mix of sizes and shapes available.

Please note that the size and weight of each sample is approximate and may vary slightly.

What is petrovsky shungite?

In fact, type 2 shungite is real shungite from Karelia, which is also called Petrovsky shungite on the Internet. But you will not always get type 2 shungite if you buy “Petrovsky shungite”. Perhaps this is a matter of confusion, or even outright deception. In fact, “Petrovsky shungite” is just a marketing name. The shungite type 2 differs from the other two most well-known types of shungite (first and third) in the amount of special amorphous shungite carbon. In turn, which contains unique fullerenes. Also, geologists have proven that shungite type 2 has an age of more than 2 billion years. And was first found from the village of Shunga, in the same deposit where deposits of type 1 shungite were found. Shunga is located in the Republic of Karelia, Russia.

What is shungite type 2?

Petrovsky shungite is a fictitious term, marketing, which often misleads people. For example, we often see that there are unscrupulous sellers on the Internet. Here they sell bracelets, pyramids, pendants. We can see that these products are made of classic type 3 shungite. But they sell them under the name “Petrovsky Elite Shungite”.

The fact is that they do not make beads or any products industrially from Petrovsky shungite (if they mean type 2 shungite). For the reason that, shungite type 2 is not subject to industrial extraction. Because his small field in the village of Shunga is closed and practically depleted. In addition, we cannot make anything from elite shungite (like shungite 1) because of its rarity and fragility. Except when we drill or tie pieces of this mineral for pendants. Moreover, there is no such mineral “elite Petrovsky shungite” in nature.

What is the difference between shungite and elite shungite?

You ask, then what is the difference between different shungites? The fact is that elite shungite always means shungite with a carbon content of at least 95%, it is shungite type 1. And it has an outer shiny surface that reflects light in such a way that it looks like silver. Read more about shungite of the shungite 1 type here.

Do we make products from shungite tipe 2?

Actually, in the production of shungite in Karelia, we do not process Petrovsky shungite. We and any other shungite production facilities cannot process it on an industrial scale and make products from it. That is, we cannot do this because of the physicochemical properties of type 2 shungite. After all, it cannot be processed. In addition, we know that the reserves of type 2 shungite are very small, and their extraction is prohibited.

However, we make geometric products in our factory only from black classical shungite of the 3rd type. Since it lends itself to processing and is officially mined in Karelia. In addition, we also do not make anything from type 1 elite shungite except for pendants when we drill or braided  individual minerals of elite shungite.

Therefore, direct shungite fakes can be found on the Internet. But in our store we do geological research and give a guarantee of the authenticity of our shungite samples, provided with certificates.

What is the difference between shungite and elite shungite?

Let’s say a little more about the appearance of raw shungite type 2. Due to some recognition, we will also sometimes have to use the marketing term “Petrovsky shungite”, but only in relation to type 2 shungite with a carbon content of 35-70%. Type 2 shungite has a gray matte, low-gloss graphite color, and also has a parallelepiped jointing (it looks like the rock consists of cubes). It was these external characteristics that reminded geologists of anthracite. Therefore, at first they called this shungite “Onega anthracite” (after the name of Lake Onega).

Due to the external resemblance to anthracite coal, shungite began to be studied in the Russian Empire since 1877. Because of the military threats, Russia urgently needed new sources of fuel. However, it turned out that it is rather difficult to heat furnaces with shungite.In addition, special furnace designs were required. Also, by 1932, scientists finally confirmed the opinion that shungite is not coal.

Thus, geological scientists say that Shungite is a primary amorphous carbonaceous compound that has been preserved on Earth since ancient times. Researchers distinguish three main popular types of shungite on the territory of Karelia: type 1, type 2, type 3 and others. They have the same carbon composition, but different amounts of carbon itself, and also differ in minerals. According to the classification of P.A. Borisov (1956).

At present, industrial volumes of type 3 shungite are known in Karelia, therefore enterprises are developing the Zazhoginskoye deposit. But the industrial development of shungite 1 and shungite type 2 does not exist, since there are no commercial reserves of these rocks. Shungite types 4 and 5 are shungite-bearing schists and rocks that once came into contact with shungite matter (dolomites, lidites, etc.). In general, this Borisov classification is rather conventional and rather industrial, it does not fully disclose the term shungite. And so there are other classifications. However, this industrial classification has caught on due to its simplicity.

Petrovsky shungite nuggets in our store are unique specimen of which is no longer in nature. All these samples has a natural shape and has not been subject to any processing. Each piece had been mined by hand. Please note, some pieces  may contain small veins of rust inclusions (pyrite and quartz). These are natural inclusions of the genuine minerals, secondary satellites of shungite. Also, The traces of other minerals that have oxidized under the influence of oxygen and water. Also, on the surface of a shungite stone, there may be large traces of pyrite, quartz and other minerals, yellowish-orange and white in color. These rust marks can be removed with a hard brush, but this is not always possible. Some inclusions go deep into the mineral and are difficult to clean. This shungite mineral is electrically conductive. Shungite freely conducts electric current while the resistance force tends to zero.

The use of petrovsky shungite.

Due to the diverse mineral composition of shungite rocks and their special structural state, the practical use of rocks is possible in a variety of areas. For example, in the chemical industry and in metallurgy, in the construction of special structures for shielding dangerous electromagnetic waves. And also for water purification from organic and inorganic substances, heavy metals and pathogenic organisms.

Shungite of the second type in large copies is ideal for a collection. It will also serve as a powerful crystal to protect against electromagnetic waves. 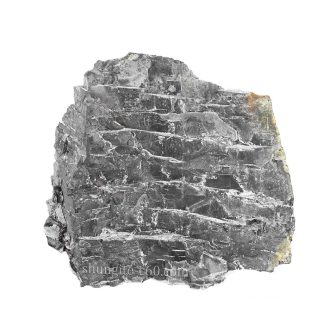