The size of Shungite zodiac pendant Sagittarius ~35 mm/1.38″ or 45 mm/1.77″ , thickness ~ 4 mm/0.15″. The pattern necklace Sagittarius is applied by engraving. If you would like to have your personal drawing on this shungite pendant, please contact us.

Each shungite pendant Sagittarius for EMF protection is unique, as is its owner. The magical shungite pendant reflects our spirituality and mental state. The shungite Zodiac pendant Sagittarius reflects a certain connection between the Zodiac and the human archetype. But in fact, not everything is predetermined and we are not what they tell us about our sign. We are all different and at the same time somewhat similar. After all, there are a great many different variations and zodiacal renditions. All this is very interesting and attracts our attention, no matter what.

We suggest you choose a shungite pendant Sagittarius for EMF protection size of 35 or 45 millimeters. Shungite stone effectively protects against EMF radiation even with a thin thickness in human hair, it is proved by scientific research. However, as the thickness of the material increases, the shielding efficiency increases according to a mathematical progression.

How we make shungite pendant Sagittarius.

We produce Shungite pendant Sagittarius from solid shungite stone. Next, we polish the disc on both sides, while the edges of the disc are not polished, but they are smooth to the touch. On the surface of the shungite circle, there may be traces of natural mineral inclusions of shungite, which give a special appearance to the stone. These include quartz and pyrite. Pyrite will appear as golden or yellowish specks or veins. At the same time, on the surface of a shungite product there may be some areas in the form of small pits or holes, as well as grooves in the form of holes. All these are traces of pyrite in shungite on a shungite zodiac pendant Sagittarius.

You can wear a pendant with shungite engraving on top or under clothes. If your clothing is light in color, there may be small traces of black shungite carbon on it. However, after a while it will stop. Moreover, if you try to strongly erase the shungite pendant Sagittarius, then you will simply erase the upper polished surface. This is not paint, just a polished surface. Do not overdo it, it will fade over time. Read in our article in more detail about shungite wearing.

Each shungite pendant Sagittarius will have a unique pattern. After all, the mineral companions of shungite give the black surface of this stone a unique inimitable pattern. In this case, the greatest contribution is made by quartz, which is white. But on a polished shungite surface, quartz looks like translucent or whitish veins. However, when we engrave shungite, white quartz inclusions can show through in the picture and you will see them. 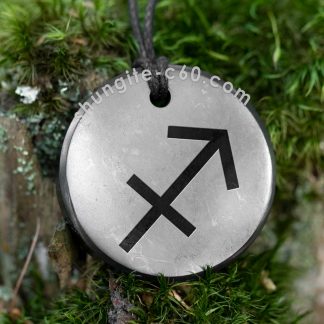