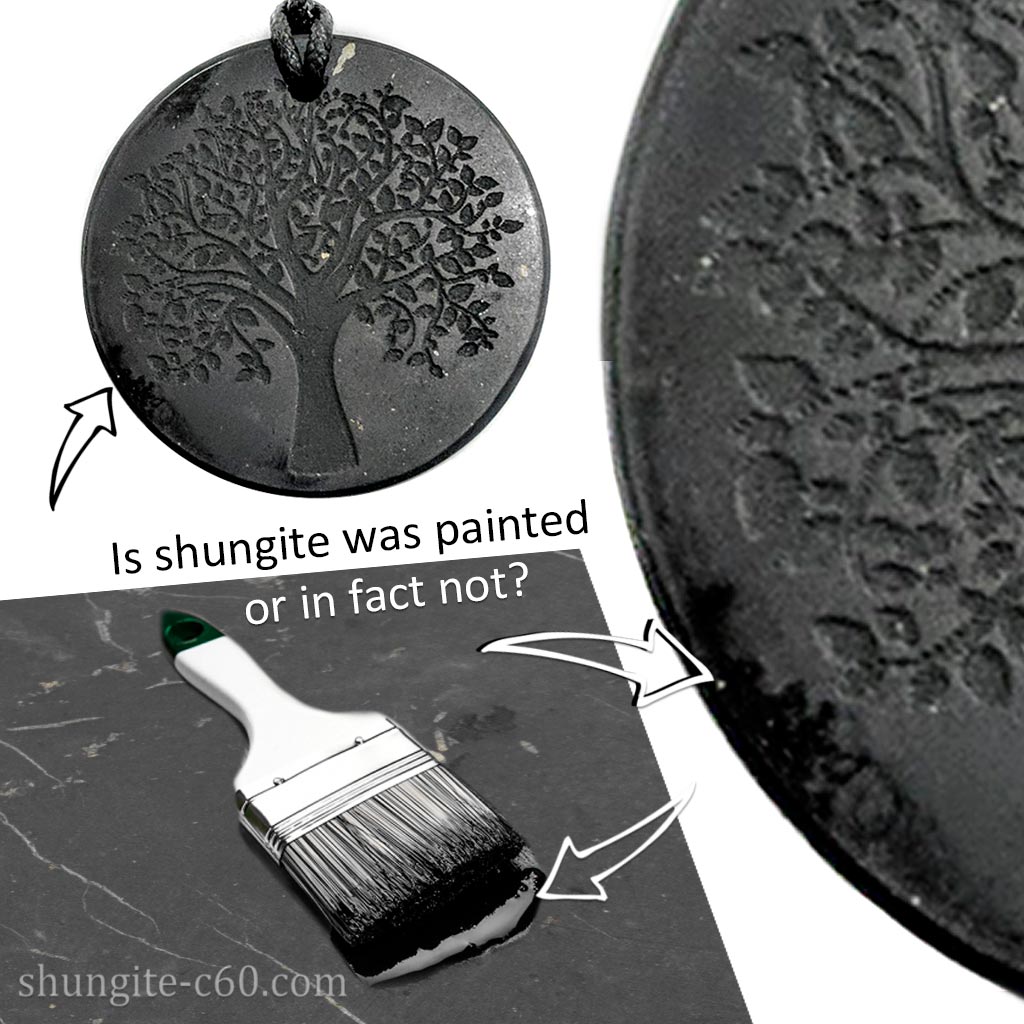 In some cases, when shungite wearing, buyers think that they bought not real shungite. Or they believe that their shungite was painted with shiny paint and it is also covered in shungite scratches. For example, one person wrote a review to our colleagues in a store.

Bought it a month ago, appears to be painted as others have mentioned. Paint is chipping off, don’t think this is really shungite. It looks cool though, except for the paint coming off.

We noticed that, as a rule, this happens with shungite products that meet a person’s body or clothing. These can be pendants, bracelets and beads, as well as some objects like spheres or harmonizers that people carry in their pockets.

Is the pendant just painted shungite with paint?

So, what makes people think that shungite has been dyed? Of course, this question worries us, shungite producers. After all, it makes no sense for us to paint shungite when it can be polished to a shine. And this is even easier than painting, it is cheaper, because you do not need to keep a special paint shop with an employee, and at the same time, the absence of paint is more environmentally friendly.

At the same time, it makes sense to paint, but only to paint with shungite paint itself. For example, if you need to cover a room with shungite paint to protect it from EMF waves. It’s easy to do this by mixing shungite powder with a coloring agent you trust. After all, shungite protects against electromagnetic radiation, and this is a scientifically proven fact.

We realized that people have such thoughts because, for example, when shungite wearing, their pendant ceases to be shiny after a while. At the same time, some places on it remain a little shiny (where there is less contact with something), and some places become dull. However, in the end, the entire product becomes dull. This is because shine is not a fundamental property of shungite. Because this is an acquired property, and it is fleeting for shungite objects with which we constantly come in contact.

Why we polish shungite products instead of making painted shungite?

But our reader can fairly notice why we polish, for example, beads, if they lose their shine so quickly? Maybe it’s because of the desire for beauty. Although she is fleeting. But the brilliance is a certain manifestation of it. And, however, then other qualities of shungite come to replace the shine – its unique texture with patterns of pyrite and quartz. After all, it does not lose its beauty like silver, which becomes cloudy from constant contact with the skin.

We will also mention an interesting case from our practice. One customer bought a small shungite sphere with a polished surface from us. One evening, he took a special solution that removes paint and applied it to the ball. As a result, in the place of contact with the solution, the polishing of the ball was removed. And he decided it was paint. Fortunately, we managed to dissuade him. After all, if you simply rub a polished ball for a long, long time without any chemical solution, then you can remove this shine. It will also happen if you carry it in your pocket.

However, if the shungite ball on the stand will stand somewhere near the working electronics. Then it will bring aesthetic pleasure, because the shine of the ball will not go anywhere – it will remain forever if you do not rub it. And also, the shungite sphere will perform its direct task of protecting against excessive EMF radiation.

How we make shungite shiny, that is, how we polish it.

As a result of the polishing process, the surface of the shungite stone becomes smooth and shiny. Therefore, we do not need to paint it with any shiny paint. This shine will never disappear if shungite products are simply kept in some place near electrical appliances. However, the shine is quickly lost if the shungite surface is rubbed against anything when shungite wearing. For example, contact with clothing or body. Also, in the process of carrying it in your pocket.

And yet, how long will the pendant shine when shungite wearing?

Unfortunately, it is difficult for us to accurately answer this question, because shungite shine is not its fundamental physical property. Most likely it is like a gift wrap. However, it is important that the shungite pendant does not shine because it is painted. And it shines because its outer surface is so polished. Moreover, there are real shungite pendants with a special shine. About them, as well as how to distinguish a real shungite pendant from a fake, we write in this article.

However, we understand the problem of shine, because for some reason a person is especially concerned with everything that glitters. Therefore, we decided to make a slightly more durable polish at least for our 35-45 mm round engraved pendants. The fact is that we use diamond particles and a special technology for polishing shungite in it. In turn, this allows to make the shine period a little longer than that of ordinary shungite pendants with standard polishing.

At the same time, we do not give a long-term guarantee for shine, since this is not the main quality of a shungite pendant, and it will inevitably become a little dull. And in this situation, we have done everything that is now in our power. If you have any feedback on the use of our engraved pendants, we would be glad to see them on our pages.

Also note that if your black pendant has a strong shine that does not come off for a long time and the pendant does not become even a little more matte, then most likely it is not natural shungite. In connection with the shungite counterfeits, we have written a long article.

The advantages of our engraved pendants.

Since we mentioned our particular engraved pendant polishing technology, we will also describe the benefits of our engraved pendants.
Let’s compare the review of a pendant from our competitors, which we wrote about at the beginning of the article. In it, the man writes that after a month the polishing was gone. In addition to that, we have information on much shorter periods.

The fact is that he had an ordinary pendant with a regular polished surface and such pendants very quickly become matte. After everything, the most important advantage of regular pendants is their various geometric shapes and those unique properties of shungite that are contained in them. And the fact that they will quickly lose their polished shine during use is even beneficial to the appearance of the pendant. After all, the true texture of the shungite stone appears outside, and it is unique in each pendant due to the natural inclusions of pyrite and quartz in authentic shungite. In turn, customers who know little about shungite may think that is shungite scratched, but this is not so, because these are veins of pyrite and quartz inside a shungite stone.

The our engraved pendant stays polished longer than regular pendants when shungite wearing.

However, we have managed to prolong the shine of our pendants. For example, look at our review of how our engraved pendant looks after continuous use for about 9 months. It still glitters a little and it’s amazing.

Also pay attention to the quality and depth of our engraving. After all, we make the depth of the drawing quite deep, and it does not look like a scribbled one. Also, our engraving lines are even and neat, and the drawing is exactly in the center.

You will not find in our assortment low-quality pendants with cheap patterns in the form of uneven notches, as in the following photo.

Summing up, let us again recall the words of the person from whose review we began to write this article. After all, he did not have information about the shungite shine property, how the manufacturers create it and what happens when shungite is used. However, this client still noticed that, «It looks cool though, except for the paint coming off». But now you know that this shungite pendant was not painted with glittering paint or varnish. In addition, you now know that inside the shungite there is quartz and pyrite. Therefore, yellow and white streaks and patches on the pendant are not shungite scratches. But in fact, the pendant has become matte because the polishing of the outer layer shungite stone has worn off. In turn, this is a normal phenomenon for authentic shungite stone.

In addition to everything, you can see in this section answers to the most popular questions about shungite.