The shape and size of the shungite stone for jewelry making will differ from the photo, that is, it will be random. Shungite contains inclusions of quartz (white) and pyrite (yellow). However, rubbing a stone will leave a black carbon trace. Please note that these shungite stones will be covered with shungite dust. Therefore, rinse the stones under running water. Then they will not get your hands dirty.

Each of these black shungite crystals stones from the unique Zazhoginsky deposit. This is the only place for the extraction of real shungite stone. These small shungite stones for jewelry making have a weight of approximately 3 to 10 grams (0.007 to 0.022 lb).

As you know, modern science has proven the ability of shungite stone to shield electromagnetic radiation. So we know that black shungite crystal stones protects from EMF waves of high intensity. Moreover, shungite stone is able to cope with 5G waves. 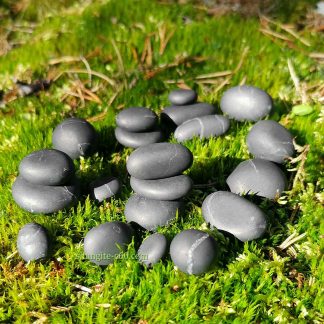