The shungite necklace Star of David is made by hand. In each pendant-master that included efforts and hearts and knowledge.

The shungite necklace Star of David is made of a single piece of rare natural shungite stone. Shungite is one of the rarest and most amazing minerals on earth. Shungite has the ability to absorb and protect against EMF. In addition, it helps to combat geopathogenic phenomena. The picture on a shungite Magen David necklace is engraved.

This pattern on a shungite Star of David pendant will not be erased and will be visible for a very long time.

Engraved shungite amulets and pendants in our shungite store are unique and do not repeat. In addition, each of these amulets is made by hand.
An shungite Magen David necklace is a natural or artificial object designed to protect people from harm and misfortune. Moreover, each pendant has its own energy.

Today, the mysterious inscription is quite common. Different peoples who have a religion may have slightly different pictures. The meaning of the secret sign is interpreted in different ways, but in any case it is associated with something mystical and supernatural.

Every religion today has a mention of it, the sign means different but very similar. Since the amulet of the star of David is found in the religions of almost all countries, anyone can use it as a talisman or talisman. Some wear it simply as an ordinary decoration, without going into the sacred meaning.

Others believe that the pendant with the star of David brings good luck, preserves health, longevity, protects from adversity. In the old days, sailors before a long journey necessarily made a tattoo to return home, and not to die in the depths of the seas and oceans.
The effect of the amulet was the highest, every day you need to hold it in your hands, carefully study, and it’s time to think about your main desire, about the dream. Desires are realized gradually. There is no need to hurry with the talisman.

Features of the production Star of David Pendant

We make each stone Star of David necklace from a monolithic piece of real shungite stone, which is more than two billion years old. It is one of the rarest and most unusual minerals on earth and has the ability to absorb and protect against EMF. In addition, it helps to combat geopathogenic phenomena.
To a small extent, the black rock includes quartz and pyrite. They give the surface of the finished product a unique pattern with their white and gold colors. Sometimes there are small voids in the structure of these neighboring rocks. They look like very small dimples on quartz and pyrite strips on shungite.

In production, we use only natural shungite stone, so we can not perfectly align the surface. And on amulets there are minor traces mechanical processing.
Of course, someone makes perfectly smooth pendants, but only from some synthetic material.
To do this, they simply fill the mold with epoxy resin, plastic and other polymers.
But our craftsmen make products by hand from hard raw rock, and then polished on all sides. In the photos you may notice small irregularities at the edges, which appear as a result of physical cutting of the stone.

The craftsman then polishes these tiny incisions, working on the entire workpiece. The result is an organic form of star of David pendant on a rare stone. 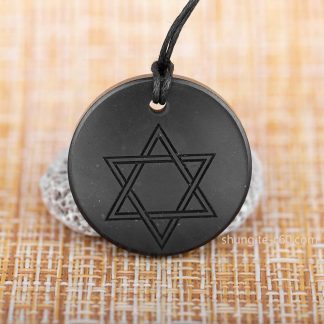