Flower of Life emf protection pendant is made from a single piece of rare natural shungite stone. Shungite is one of the rarest and most amazing minerals on earth. Shungite has the ability to absorb and emf protection. In addition, it helps to fight geopathogenic phenomena. The picture on a shungite white engraving necklace is applied by engraving.

This pattern will not be erased and will be visible for a very long time.
Black stone shungite pendant Fower of Life with shungite white engraving and pendants in our store are unique and nonrepeating. In addition, each of this amulet made by hand. Flower of Life emf protection necklace is a natural or man-made object designed to protect people from harm and misfortune. Moreover, each shungite pendant has its own energy.

Flower of Life symbol on shungite pendants engraved. This unique and mysterious symbol is found in almost every religion. The image of the Flower of Life can be found in ancient temples in Egypt, China, Greece, Ireland and other countries.
It symbolizes the infinity of the universe, which arose from emptiness at the will of the Creator. In our world, it is represented by the eternal cycle of life in nature.
After all, when flowers appear on a tree, they turn into fruits, which ripen and are filled with fertile seeds, and new trees will appear from them. Therefore, the flower of life is a kind of explanation of the very creation of the universe, showing its laws.

We make each Flower of Life emf protection pendant  from monolithic piece of real shungite stone, whose age is more than two billion years. This is one of the rarest and most unusual minerals on earth, it has the ability to absorb and protect against EMF. In addition, it helps to combat geopathogenic phenomena.
To a small extent, the black rock includes quartz and pyrite. They give the surface of finished goods a unique pattern with their white and gold colors. Sometimes there are small voids in the structure of these neighboring rocks. They look like very little dimples in quartz and pyrite stripes on shungite.

We use only natural shungite stone in production, so we cannot perfectly smooth the surface. And on the shungite amulets there are minor traces of machining.
Of course, someone makes perfectly smooth pendants, but only from some synthetic material. To do this, they simply fill in the form of epoxy resin, plastics and other polymers.
But our craftsmen carve products by hand from solid raw rock, and then polish from all sides. In the photographs, you may notice slight irregularities at the edges that appear as a result of physical cutting of the stone.

The master then polishes these tiny cuts while working on the entire workpiece. As a result, we get an organic shape of an shungite necklace on stone made of rare rock.
An shungite Flower of Life necklace made of true shungite will help to be in harmony with your body and spirit, to find inner unity.

We suggest you choose a flower of life emf protection pendant size of 35 or 45 millimeters. Shungite stone effectively protects against EMF radiation even with a thin thickness in human hair, it is proved by scientific research. However, as the thickness of the material increases, the shielding efficiency increases according to a mathematical progression.

How we make shungite Flower of Life emf protection pendant.

We produce shungite Flower of Life emf protection necklace from solid shungite stone. Next, we polish the disc on both sides, while the edges of the disc are not polished, but they are smooth to the touch. On the surface of the shungite circle, there may be traces of natural mineral inclusions of shungite, which give a special appearance to the stone.
These include quartz and pyrite. Pyrite will appear as golden or yellowish specks or veins. At the same time, on the surface of a shungite product there may be some areas in the form of small pits or holes, as well as grooves in the form of holes. All these are traces of pyrite in shungite on a shungite necklace.

You can wear a pendant with shungite engraving on top or under clothes. If your clothing is light in color, there may be small traces of black shungite carbon on it. However, after a while it will stop. Moreover, if you try to strongly erase the shungite necklace, then you will simply erase the upper polished surface.
This is not paint, just a polished surface. Do not overdo it, it will fade over time. Read in our article in more detail about shungite wearing.

At the same time, even if your pendant has become matte, it will not stop being black. At the same time, it will not get dirty on clothes, but if the pendant is rubbed against something hard, a black mark will remain. This is because shungite carbon is black in color, and the entire shungite Flower of Life necklace is completely made of shungite carbon.
It is difficult to explain, but if you start wearing a shungite pendant, you will understand this stone and its properties, as well as it will become closer and more understandable for you.

Each shungite Flower of Life pendant will have a unique pattern. After all, the mineral companions of shungite give the black surface of this stone a unique inimitable pattern. These include the mineral yellow pyrite and quartz. In turn, the greatest contribution is made by quartz, which is white.
But on a polished shungite surface, quartz looks like translucent or whitish veins.
However, when we engrave shungite, white quartz inclusions can show through in the picture and you will see them.

The white engraving on a black shungite pendant.

Why is the black shungite pendant engraved with a white tracery? No, this is not a paint drawing that will be erased over time. The fact is that we do the engraving on the shungite pendant in a special way.
Since the composition of this shungite stone contains inclusions of the mineral quartz, it inevitably appears with ordinary engraving. In this regard, the black drawing may have white quartz stripes and streaks, but arranged in a chaotic way.

However, we noticed that we can better show the beauty of white quartz in black shungite. And we discovered a special technology of engraving, thanks to which the pattern on the shungite pendant is manifested thanks to the quartz in the shungite. Please note that the pattern on the pendant will be different each time and not quite uniform, since it is a natural stone.

The white engraving on the black shungite Flower of Life pendant looks incredibly impressive. At the same time, the durability of the pattern on the pendant is so high that the symbol of the Flower of Life will remain on it forever. 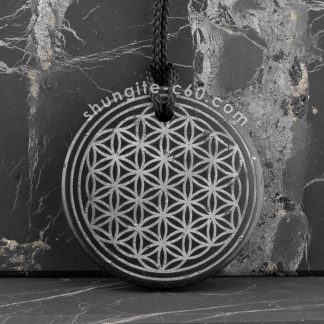