More different pendants made of natural shungite stone can be found in our store in this section.

We decided to make pendants of this rare and unusual black stone. To bring together all the properties of the geometric shape of the energy of the stone and its abilities. We make shungite pendants emphysema from a single piece of real shungite stone. Each geometric shungite pendant is carved by a master according to the required shape from a raw piece of solid stone.

We have tried to make the most widespread shungite geometric pendants in nature. For example, it is triangular, round or rectangular shapes. We have also made a shungite pendant EMF, which have a more complex geometric shape.

The uniqueness of each geometric shungit pendant

At first glance you can tell that all pendants are the same size and weight if they have the same name. But this is not quite true. Each pendant can be confidently called unique. For example, as fingerprints of a person. This is made possible by the following features of the stone and production.

First, each geometric shungite pendant is made by hand. In this regard, it has its own unique size and weight.

Secondly, shungite stone has two minerals in its composition. These are Pyrite and Quartzite. These minerals like human fingerprints draw different patterns on the surface of each shungite emphysema. This pattern is never repeated. As a result, you can be sure that you have your own unique talisman, which no one else on earth.

Many obscure shops and sellers from around the world sell certain fakes. Sometimes they themselves do not know about it and are conscientiously mistaken in authenticity. For example, in nature there is a very common rock Orgonite. It is a black mineral and it also conducts an electric current. As a result, sellers from other countries or cities in Russia with all confidence assure their customers that their goods are genuine. But they themselves not know about how, that in their the hands of forgery. Shungite gemetric pendants are no exception.

This black Karelian stone is really very rare due to the fact that it was discovered only in Russia in the Karelian region. We live in this region and control the entire process of production from the supply of stone to the final result in the hands of the master. You can be sure that in front of you is not stamped blank made with a mold and press is unknown from what materials.

In addition, we guarantee you that each of our pendant is made of 100% natural stone without any additives. 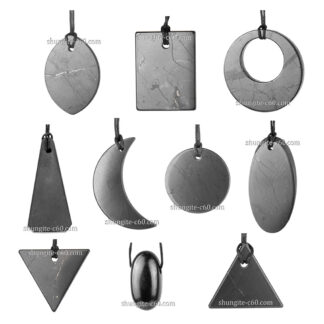