Shungite pendant with engraving “Tree Of Life” 50 mm/1.97 inches on a both side

One of the most ancient and powerful of amulets on the Earth.

This pendant from a unique shungite stone has the largest size and engraved with both side. The diameter of the shungite big Tree of Life pendant is ~ 50 mm /1.97”. The thickness of the pendant is ~ 3 mm /0,12”. Please note that in the process of engraving a pattern on a real shungite stone, natural stripes of white quartz may appear.

The Tree of Life necklace engraved is one of the most ancient and powerful symbols found in many cultures. The big tree of life pendant is an inexhaustible source of life; prosperous nature and happy procreation; a symbol that unites the concepts of space and time. It is also called the World Tree, which personifies the Universe in its constant revival; represents absolute wisdom and immortality, therefore the World Tree is a repository of life and the ruler of destinies.
Also, the Tree of Life is a sign of love and family unity, a reliable connection with the Family. Roots, trunk and branches are a single whole of one eternal organism. A person who contemplates the Tree of Life receives from the ancestors the strength and wisdom, tested for centuries. The Shungite pendant with engraving Tree of Life bestows longevity and support of relatives, the prosperity of the Family.

Tree of Life necklace engraved as a amulet

Shungite pendant with engraving Tree of Life as a symbol

The Shungite pendant with engraving Tree of Life is, first of all, a symbol of the connection of our world and the world of heaven. As a tree stretches to the sky and receives energy from the sun, so a person stretches to the universal energy, to its flows. This is a very harmonious symbol, because the tree has always been a symbol of life, development, growth.

Also, the tree of life necklace engraved can denote the Genus. As all leaves are bound to the branches, and branches to the trunk, so we are bound to our ancestors. Each person is connected to the energy of the genus. It protects the power of the ancestors, helping in difficult situations, becoming a powerful shield against negativity.

Life of a tree and a person in some traditions.

Features of the production Tree of Life necklace engraved

Please note that the natural mineral shungite contains minerals such as quartz and pyrite. These are natural satellites that entered the shungite mineral during its formation. Mineral quartz is white or transparent in color. In turn, pyrite is yellow and yellowish to orange in color.
The most interesting thing is that on the surface of black shungite these mineral inclusions can have the form of stripes, or various points. And in this regard, an inexperienced outside observer may perceive these stripes as scratches. But this is absolutely not the case. After all, these are just whitish, transparent or yellow inclusions of quartz and pyrite minerals on a shungite necklace engraved. Don’t be afraid of them. In this regard, when we engrave pendants, white stripes from quartz may appear in the drawing.

Be the first to review “Shungite pendant with engraving “Tree Of Life” 50 mm/1.97 inches on a both side” Cancel reply 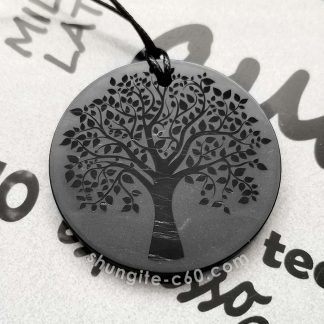