You get exactly the sample that you see in the photo. Please note that the size and weight of each sample elite type 1 shungite is approximate and may vary slightly.

What is elite shungite type 1?

Elite shungite type 1 is the rarest ancient mineral of precambrian age containing molecules of fullerenes c60 and c70. Such fullerenes were discovered by scientists of 1992 year only in elite shungite from a deposit in Karelia, Russia.
Nowhere else in the world are there deposits of such nuggets of elite shungite stones. Learn more about this unique mineral in our article.

Why is this mineral so rare?

Firstly, the uniqueness of the shungite mineral is due to its rarest composition. After all, Karelian shungite consists almost entirely of 98-99% carbon of a special amorphous form. This is a form of carbon in which fullerene molecules can originate and exist.

Secondly, unfortunately, the largest shungite deposit with inclusions of elite shungite veins has long been exhausted. This deposit existed in Karelia, in the village of Shunga. It was developed by the Soviet trust “Shungit” and in 1933 they closed this adit.
After all, the reserves of unique shungite of the first type (elite shungite) have been exhausted. At the same time, the geologist N. I. Ryabov, who in 1933 estimated the geological reserves of minerals in the Shunga deposit, spoke about 1-2% of the presence of elite shungite in the entire adit.

Is it possible to find something else in the elite shungite deposit in Karelia?

The deposit of Karelian shungite of the first type (elite shungite with carbon content up to 98-99%) in the village of Shunga is currently exhausted. It is officially closed, and no development can be carried out there anymore. Also, that shungite 1 type mine is now flooded.

However, we were looking for the remains of this rare mineral. Sometimes we managed to do it, but it was a very difficult path. We found small interlayers and very small areas of shiny elite shungite of the first type in thick enclosing veins of the second type of shungite and dolomite. Unfortunately, these were only fragments and small pebbles.
At the same time, we can no longer find large nuggets of elite shungite of the first type. All samples that we have in the collection are exceptional and the last of their kind.

In our Karelian shungite store, only genuine samples of elite shungite stones are presented. All of them are mined by hand in the only elite shungite deposit in the world in Karelia. And at present, this is the only place on earth where this rarest mineral with amazing properties was found.

Each sample of elite shungite 1 type is unique and has no repetitions. All samples are hand-picked and have not been processed in any way.

Please note that real shungite of the first type may contain traces of other minerals on its surface. These are oxidized traces of pyrite or quartz, often yellowish or orange in color.

They can also be gently removed with a stiff, iron-bristle brush. However, we warn you, this must be done very, very carefully, because you can damage the stone, and the stone can easily collapse. In general, we do not especially recommend carrying out these actions on your own with rare large samples of elite shungite.

Certificate of authenticity and geological studies of samples.

Our shungite store comes from Karelia and we ourselves found our samples in the adit.

Our regular customers have drawn our attention to the increasing cases of elite shungite falsification. Therefore, be careful, because on the Internet, for example, anthracite can be passed off as real elite shungite. However, only in one place on Earth – in Karelia, was found elite shungite of the first type.
And elite shungite cannot be cheaper than in the place where it was found. You can also find out more details about elite shungite fakes in our article. 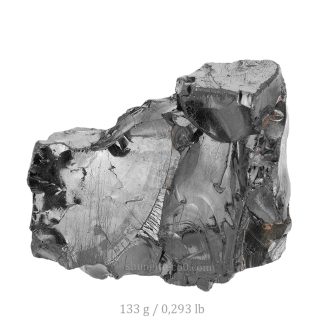