The symbol of the cross is found in all cultures, but it acquired special meaning in Christianity, where it is associated with the image of the great sacrifice of Jesus Christ. Please note that on a natural shungite pendant, after engraving, white quartz inclusions may appear. Also, in natural shungite, golden inclusions of the mineral pyrite can be found.

This engraved shungite pendant cross is made from a single piece of rare natural shungite stone. Shungite is one of the rarest and most amazing minerals on earth. Shungite has the ability to absorb and emf protection. In addition, it helps to fight geopathogenic phenomena. The picture is applied by engraving. This pattern will not be erased and will be visible for a very long time.

Shungite engraved amulets and pendants in our store are unique and nonrepeating. In addition, each of this amulet made by hand.
Amulet is a natural or man-made object designed to protect people from harm and misfortune. Moreover, each amulet has its own energy.

The engraved shungite pendant cross. The symbol of the sacrifice of Christ and – in a more general sense – of the Christian religion.

This shungite pendant cross has a very widespread cross shape, where a vertical beam is crossed by a horizontal one by one third of its length. This form, repeating in general outline the contour of the human body hanging crucified on the cross, and thus representing the Passion of Christ, became the basis for the six-pointed and eight-pointed crosses that became widespread in Orthodoxy.

However, the Latin cross itself, despite its “western” name, is also often found in the Orthodox environment, among ornamental architectural forms, on vestments and even occasionally among domed crosses. Some researchers, following the opinions of Saint Irenaeus of Lyons and Justin the Philosopher, believe that the real Cross of the Lord had this very shape.

We make each shungite pendant cross from monolithic piece of real shungite stone, whose age is more than two billion years. This is one of the rarest and most unusual minerals on earth, it has the ability to absorb and protect against EMF. In addition, it helps to combat geopathogenic phenomena.

A natural stone pendant is cut from a single piece of rock.

We use only natural shungite stone in production, so we cannot perfectly smooth the surface. And on the amulets there are minor traces of machining.
Of course, someone makes perfectly smooth pendants, but only from some synthetic material.

To do this, they simply fill in the form of epoxy resin, plastics and other polymers.
But our craftsmen carve products by hand from solid raw rock, and then polish from all sides. In the photographs, you may notice slight irregularities at the edges that appear as a result of physical cutting of the stone.

Advantages of our shungite engraved shungite necklace Tree of Life. 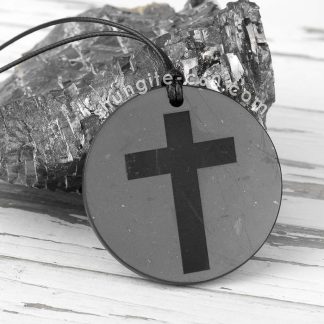 You're viewing: Shungite pendant cross with engraving round shape 7.70 $
Add to cart