The size of shungite Ankh pendant stone ~30 mm/1.18″ , thickness ~ 3 mm/0.12″.  If you would like to have your personal drawing on this shungite pendant, please contact us.

This shungite Ankh pendant is made from a single piece of rare natural shungite stone. Shungite is one of the rarest and most amazing minerals on earth. Shungite has the ability to absorb and emf protection. In addition, natural shungite ankh cross necklace helps to fight geopathogenic phenomena. We apply this Pattern to a shungite necklace ankh using engraving.

Therefore, this pattern will not be erased and will be visible for a very long time. Black stone shungite pendant with engraving this ancient alchemical symbol and pendants in our store are unique and non repeating. In addition, each of this amulet made by hand.

The shungite ankh pendant symbol pendant is a natural or man-made object designed to protect people from harm and misfortune. Moreover, each shungite pendant has its own energy.

Shungite ankh cross necklace and the meaning of the ankh in ancient Egypt.

According to many Egyptologists, the original meaning of the ankh is related to magic. It was used by the ancient priests as a magic knot that gave strength. They considered him the key to secret knowledge, the wisdom of the gods, power and strength.

It is not for nothing that in many images the gods pass the cross with a noose to the pharaohs as a sign of immortality and eternal power, wisdom and power. The types of meanings of the Egyptian crosses changed from era to era, but the essence remained the same.

Another meaning of the symbol is the combination of masculine and feminine principles. Ankh is the sign of the union of Isis and Osiris. According to legend, the goddess Isis connected the scattered parts of her murdered husband Osiris and revived him. Thus, the ankh cross is a divine knot that combines rebirth to life, loyalty and devotion, heaven and earth.

It means human life, which rises on the noose of immortality, if the spirit and thoughts are pure. The ascent to the sky along the ankh’s loop leads to eternity and immortality of the soul, contributes to its transition to a new level of being.

Researchers of Ancient Egypt also believed that the akhn cross is the key of the Nile. He opened the door to secret knowledge, as well as to sources of strength and power.

The ancient Egyptians depicted the goddess of truth, Maat, along with this sign. In addition, they drew cross akhn together with the god Anubis. And he was also held in the hands of the goddess of music and fun Hathor.

Besides. this symbol was in the hands of such gods as the god of the underworld Set, the sun god Aton.

We make each shungite Ankh pendant  from monolithic piece of real shungite stone, whose age is more than two billion years. This is one of the rarest and most unusual minerals on earth, it has the ability to absorb and protect against EMF. In addition, it helps to combat geopathogenic phenomena.
To a small extent, the black rock includes quartz and pyrite.

They give the surface of finished goods a unique pattern with their white and gold colors. Sometimes there are small voids in the structure of these neighboring rocks. They look like very little dimples in quartz and pyrite stripes on shungite.

We use only natural shungite stone in production, so we cannot perfectly smooth the surface. And on the shungite amulets there are minor traces of machining. Of course, someone makes perfectly smooth pendants, but only from some synthetic material.

To do this, they simply fill in the form of epoxy resin, plastics and other polymers. But our craftsmen carve products by hand from solid raw rock, and then polish from all sides. You may also notice small irregularities around the edges, which appear as a result of the physical cutting of natural stone.

The master then polishes these tiny cuts while working on the entire workpiece. As a result, we get an organic shape of an shungite necklace Ankh on stone made of rare rock.
An shungite Ankh pendant symbol pendant made of true shungite will help to be in harmony with your body and spirit, to find inner unity.

You can wear a pendant with shungite engraving on top or under clothes. If your clothing is light in color, there may be small traces of black shungite carbon on it. However, after a while it will stop. Moreover, if you try to strongly erase the ankh cross necklace, then you will simply erase the upper polished surface.

This is not paint, just a polished surface. Do not overdo it, it will fade over time. Read in our article in more detail about shungite wearing.

At the same time, even if yourankh cross necklace has become matte, it will not stop being black. At the same time, he will not stain your clothes, but if you rub him on something hard, then a black mark will remain. This is due to the black color of shungite carbon.

It is difficult to explain, but if you start wearing a shungite necklace Ankh, you will understand this stone and its properties, as well as it will become closer and more understandable for you.

Each shungite ankh pendant will have a unique pattern. After all, the mineral companions of shungite give the black surface of this stone a unique inimitable pattern. These include the mineral yellow pyrite and quartz.

In turn, the greatest contribution is made by quartz, which is white. But on a polished shungite surface, quartz looks like translucent or whitish veins. However, when we engrave shungite, white quartz inclusions can show through in the picture and you will see them. 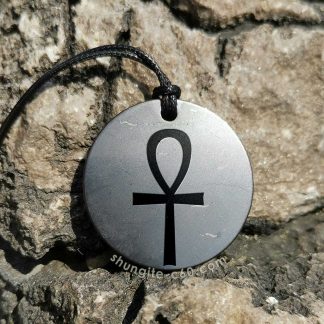