The shungite meditation pendant with engraving Ashtanga Yantra is made by hand.

We from Karelia (Russia) make hand-made pendants with deep engraving from real and very ancient shungite stone at our shungite factory. This black mineral has proven EMF protective properties and the ability to relieve geopathic stress. This shungite meditation pendant Ashtanga Yantra and necklace with personalized drawing is made from a single piece of natural stone. All of our pendants and necklaces are cut only by hand from a single piece of shungite. These are not factory-stamped forms. In this regard, each shungite yoga pendant has a unique size and weight.

Please note that the black mineral shungite contains minerals such as quartz and pyrite. These are natural satellites that entered the shungite mineral during its formation. Mineral quartz is white or transparent in color. In turn, pyrite is yellow and yellowish to orange in color.
The most interesting thing is that on the surface of black shungite these mineral inclusions can have the form of stripes, or various points. And in this regard, an inexperienced outside observer may perceive these stripes as scratches. But this is absolutely not the case. After all, these are just whitish, transparent or yellow inclusions of quartz and pyrite minerals. Don’t be afraid of them.

Yoga and shungite for meditation.

Ashtanga yoga – a very complex and dynamic type of yoga – was developed by Pattabhi Jois and in translation from Sanskrit means “yoga of the eight steps.” This is a very dynamic and precise practice. It is based on the synchronization of breathing with the sequential performance of asanas.

Ashtanga Yoga is a powerful dynamic style with the following characteristics:

When performing movements in Ashtanga Yoga, shungite for meditation will help you, as this ancient mineral is very high in energy.

Yantra Yoga includes body movements, breathing exercises and visualizations. It is convenient to visualize with mandalas on the Shungite meditation pendant Ashtanga Yantra.
Different types of movements and postures are associated with different aspects of breathing and are used in order to control the life energy-prana. Since a person’s physical and mental well-being depends primarily on the state of his energy, through the practice of yantra yoga, you can maintain your health and keep your mind relaxed.

The main advantage of Yantra yoga is the sequence of certain movements. This type of yoga is characterized by dynamism, which cannot be said about other types of yoga, in which a special place is given to static. According to the Tibetans, nothing can revive the energy in the human body like special movements. And in order to feel the whole essence of the movements, you need to do these exercises. If you wear the Shungite meditation pendant while practicing yoga, the powerful energy of this ancient stone will help you synchronize your energy with the energy of the Earth.

Advantages of our shungite yoga pendant.

You can wear a shungite meditation pendant on top or under clothes. If your clothing is light in color, there may be small traces of black shungite carbon on it. However, after a while it will stop. Moreover, if you try to strongly erase the shungite pendant, then you will simply erase the upper polished surface. This is not paint, just a polished surface. Do not overdo it, it will fade over time. Read in our article in more detail about shungite wearing.

It is difficult to answer this question exactly, but the brilliance of the shungite meditation pendant is not its fundamental property. It’s probably like, a gift wrap. Very important is the fact that the luster of the pendant is not associated with paint. This is how the polished surface of shungite stone shines. The gloss was formed as a result of repeated rubbing of the pendant surface with special polishing agents.

An interesting fact is that shungite stone is very easy to Polish. At the same time, it quickly loses its luster when constantly in contact with something: with clothes or on the body. The shungite product becomes matte, as the upper polished layer is erased. However, this is not paint, but the outer layer of the polished surface of the shungite pendant.

We understand that. Therefore, we make the polishing of engraved pendants in our store different from regular pendants. We use diamond particles to Polish our engraved pendants. This allows you to make the gloss period a little longer than that of conventional shungite pendants.

Also keep in mind that if your black pendant Ashtanga Yantra has a strong shine, which does not take off for a long time and the pendant does not become more matte, then most likely it is not natural shungite. We have written a long article about fakes of shungite.

More pendants and other products for meditation, example Shungite and soapstone Harmonizers from real shungite stone are presented in our store. 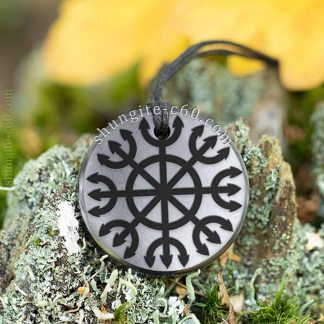