At the moment you get acquainted with one of the most striking and powerful symbols of Northern Magic. Shungite necklace Helm of Awe is one of the strongest amulets of protection.

This Aegishjalmur Pendant is made from a single piece of rare natural shungite stone. Shungite is one of the rarest and most amazing minerals on earth. Shungite has the ability to absorb and emf protection. In addition, it helps to fight geopathogenic phenomena. The picture on a shungite necklace Helm of Awe is applied by engraving.

This pattern on a shungite pendant Helm of Awe will not be erased and will be visible for a very long time.

Shungite engraved amulets and pendants in our store are unique and nonrepeating. In addition, each of this amulet made by hand.
Amulet is a natural or man-made object designed to protect people from harm and misfortune. Moreover, each amulet has its own energy.

The shungite pendant Helm of Awe or Aegishjalmur pendant, also known as the helmet of terror or helmet of awe. The name gives you goosebumps. This is one of the mysterious signs of the Northern peoples, a talisman designed to protect its owner from the negative impact of enemies and detractors, and not part of military ammunition, as can be solved by the name.

Some associate it with the treasure of the Nibelungs. The editors of the site about amulets will tell about the options of the amulet, explain the meaning of each part and give examples of use.

We make each Aegishjalmur Pendant from monolithic piece of real shungite stone, whose age is more than two billion years. This is one of the rarest and most unusual minerals on earth, it has the ability to absorb and protect against EMF. In addition, it helps to combat geopathogenic phenomena.

Features of the production of pendants from natural shungite stone.

We use only natural shungite stone in production, so we cannot perfectly smooth the surface. And on the amulets there are minor traces of machining.
Of course, someone makes perfectly smooth pendants, but only from some synthetic material. To do this, they simply fill in the form of epoxy resin, plastics and other polymers.

But our craftsmen carve products by hand from solid raw rock, and then polish from all sides. In the photographs, you may notice slight irregularities at the edges that appear as a result of physical cutting of the stone.

The master then polishes these tiny cuts while working on the entire workpiece. As a result, we get an organic shape of an Aegishjalmur Pendant on stone made of rare rock.
An shungite necklace Helm of Awe made of true shungite will help to be in harmony with your body and spirit, to find inner unity.

Be the first to review “Shungite Amulet “Aegishjalmur”” Cancel reply 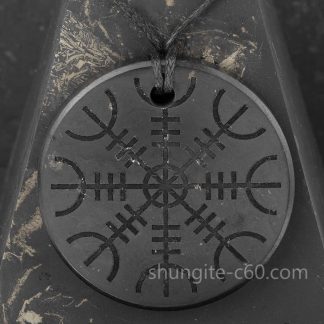