This Black Sun Pendant is made from a single piece of rare natural shungite stone. Shungite is one of the rarest and most amazing minerals on earth. Shungite has the ability to absorb and emf protection. In addition, it helps to fight geopathogenic phenomena. The picture is applied by engraving.
This pattern will not be erased and will be visible for a very long time. Shungite engraved amulets and pendants in our store are unique and nonrepeating. In addition, each of this amulet made by hand. Amulet is a natural or man-made object designed to protect people from harm and misfortune. Moreover, each amulet has its own energy.

The earliest mention (19th century) in the literature about the Black Sun symbol belongs to the writer and philosopher Elena Blavatsky, born in the Russian Empire, who called the black sun the instinct center of the universe and the starting point of our reality, based on the secret teachings of the northern peoples.
Later, German occultists began to write about the Black Sun in the early 20th century, later this symbol was adapted for German ideas and was mentioned in the literature of the corresponding direction.

According to Slavic myths, the sign of the sun consists of 12 rays, which symbolize the invisible threads of sacred and spiritual connection with the ancestors. A generational bond is a rolling wheel that continuously moves from one era to another.
Shungite pendant the black sun is a powerful symbol of the beginning of the race. Pendant of natural stone black sun to touch the source of strength in your soul, to feel previously inaccessible opportunities.

Pendant The black sun from shungite stone can be used for protective purposes, and at all times, in any situation. Ancestors will come to help, you can count on their support.

We make each Black Sun Pendant from monolithic piece of real shungite stone, whose age is more than two billion years. This is one of the rarest and most unusual minerals on earth, it has the ability to absorb and protect against EMF. In addition, it helps to combat geopathogenic phenomena.
To a small extent, the black rock includes quartz and pyrite. They give the surface of finished goods a unique pattern with their white and gold colors. Sometimes there are small voids in the structure of these neighboring rocks. They look like very little dimples in quartz and pyrite stripes on shungite.

The master then polishes these tiny cuts while working on the entire workpiece. As a result, we get an organic shape of an Black Sun Pendant on stone made of rare rock.
An Black Sun Pendant necklace made of true shungite will help to be in harmony with your body and spirit, to find inner unity. 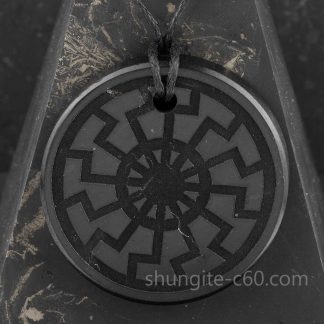