This Valknut Pendant is made from a single piece of rare natural shungite stone. Shungite is one of the rarest and most amazing minerals on earth. Shungite has the ability to absorb and emf protection. In addition, it helps to fight geopathogenic phenomena. The picture on a shungite necklace Valknut is applied by engraving.
This pattern will not be erased and will be visible for a very long time. Shungite engraved amulets and pendants in our store are unique and nonrepeating. In addition, each of this amulet made by hand. Amulet is a natural or man-made object designed to protect people from harm and misfortune. Moreover, each amulet has its own energy.

Engraved on a shungite pendant, the Valknut sign is a recognizable symbol of Scandinavian mythology. Three Interlocked Triangles is also found in German paganism.
The main purpose of the amulet Valknut symbol can be interpreted as the key to nine worlds. As a result, which can make it possible to control the transitions between them.
According to Scandinavian beliefs, a person lives in the horizontal world of Midgard.

Modern human life, weighed down by stresses, does not make it possible to gain lightness of spirit and soar to the upper vertical world of the gods Asgadra.
The human spirit, under the weight of problems, can also fall before visiting the lower world, but this is not something bad because this world is part of a harmonious system of nine worlds and its visit is the key to solving important issues.
It is necessary to face the troubles, defeat the darkness, and like Odin triumphantly ascend to the upper world of Gods.

A person who wears a shungite pendant Valknut will receive a unique ability to understand being and will be able to open the borders of all nine worlds.

Features of the production Valknut Pendant

We make each shungite pendant necklace Valknut from monolithic piece of real shungite stone, whose age is more than two billion years. This is one of the rarest and most unusual minerals on earth, it has the ability to absorb and protect against EMF. In addition, it helps to combat geopathogenic phenomena.
To a small extent, the black rock includes quartz and pyrite. They give the surface of finished goods a unique pattern with their white and gold colors. Sometimes there are small voids in the structure of these neighboring rocks. They look like very little dimples in quartz and pyrite stripes on shungite.

The master then polishes these tiny cuts while working on the entire workpiece. As a result, we get an organic shape of an Valknut Pendant on stone made of rare rock.
An Valknut Pendant necklace made of true shungite will help to be in harmony with your body and spirit, to find inner unity.

Be the first to review “Shungite amulet “Valknut”” Cancel reply 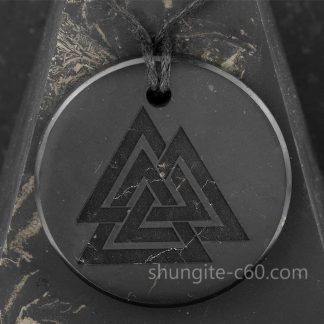