Our shungite company from Karelia present a set of 163 shungite pendants engraved with the most relevant symbols, which are presented here. Shungite wholesale pendants high quality directly from Karelia. Also among the engraved pendants there are two types of geometric pendants, in the form of a butterfly wing and a hexagon.

Which we made from a single piece of a rare natural stone – shungite. Shungite is one of the rarest and most amazing minerals on earth. Shungite has the ability to absorb and emf protection. In addition, it helps to fight geopathogenic phenomena. We applied these drawings to the shungite wholesale pendants in using the engraving method.

Therefore, this pattern will not be erased and will be visible for a very long time. Shungite engraved necklace and pendants in our store are unique and nonrepeating. In addition, each of this amulet made by hand.
Amulet is a natural or man-made object designed to protect people from harm and misfortune. Moreover, each amulet has its own energy.

Features of the production Shungite pendants set with engraving

We make each shungite pendants set with engraving from monolithic piece of real shungite stone, whose age is more than two billion years. This is one of the rarest and most unusual minerals on earth, it has the ability to absorb and protect against EMF. In addition, it helps to combat geopathogenic phenomena.

We use only natural shungite stone in production, so we cannot perfectly smooth the surface. And on the amulets there are minor traces of machining.
Of course, someone makes perfectly smooth pendants, but only from some synthetic material.

To do this, they simply fill in the form of epoxy resin, plastics and other polymers.
But our craftsmen carve products by hand from solid raw rock, and then polish from all sides. In the photographs, you may notice slight irregularities at the edges that appear as a result of physical cutting of the stone.

The shungite set contains 163 original pendants, which include:

The numerical numbering in the list below corresponds to the number of the pendant in the photo in this gallery. You can follow the links and read more about our pendants and their meaning.

The symbol of Star of David

The shungite wholesale pendants with engraved symbol of Star of David. Currently, this symbol is associated only with the state of Israel. However, it has been used since the Bronze Age in many cultures, even in the Christian and up to Mestopotamia. Mostly for magical purposes and for rituals. Indeed, in alchemy, for example, two triangles of this sign symbolize fire and water, and together they embody the unity of opposites.
Legends say the name of King Solomon is associated with the Star of David because of the seal on the star ring he wore. At the same time, the seal of Solomon helped the king to control the spirits and fight demons.

Shungite wholesale pendants with the image of Awen (otherwise – Tribann) are a non-rudian symbol. The Welsh word “awen” literally means “inspiration.” The person who has been touched by Inspiration (whether it is poet, musician, or fortuneteller) is called “awenydd” in Welsh.
The symbol means the irradiation of three rays from one point, as an emanation of a deity, three points of sunrise at the solstice and equinox. And it is also called the Triad of Dawns.

The sign of Eye of Horus on the shungite pendants set

Wadget is an ancient Egyptian symbol, the left Hawkeye of the God Horus, who was knocked out in his fight with Set. The right Eye of Horus symbolized the sun, and the left eye – the Moon, its damage was explained by the phases of the Moon.
This eye, healed by the god Thoth, became a powerful amulet worn by the pharaohs. He personified various aspects of the divine world order, from royal power to fertility. This is how the left eye of Horus became the symbol of healing and protection on shungite pendants engraved.

The symbol of Yin and Yang

Shungite pendants engraved with Yin-Yang. The meaning of the Yin and Yang symbols originates from ancient Chinese philosophy. The Yin-Yang symbol was discovered as early as the 7th century BC.

As you know, the whole world consists of opposites. And the power of the Yin-Yang amulet lies precisely in the combination of opposite forces, in their balanced and harmonious coexistence with each other. It does not matter what these principles are: unity, harmony, love or friendship. Indeed, in the struggle they find a consensus. And only by inseparably interacting with each other, they develop.

Ancient Chinese sages interpreted Yin-Yang as a symbol of the unity of the whole and as its opposite parts. At the same time, they interact with each other, mutually transform into each other, together make up a common, strongest energy “qi”.

The sign of Flower of Life on the shungite pendants set

Flower of Life symbol on shungite pendants engraved. This unique and mysterious symbol is found in almost every religion. The image of the Flower of Life can be found in ancient temples in Egypt, China, Greece, Ireland and other countries. It symbolizes the infinity of the universe, which arose from emptiness at the will of the Creator.
In our world, it is represented by the eternal cycle of life in nature. After all, when flowers appear on a tree, they turn into fruits, which ripen and are filled with fertile seeds, and new trees will appear from them. Therefore, the flower of life is a kind of explanation of the very creation of the universe, showing its laws.

The symbol of Valknut

Shungite pendants set with Valknut is a magic symbol, interweaving of three triangles. Valknut is a symbol of Odin and the magic associated with him, a symbol of transitions and bridges between worlds. Also Valknut is a symbol of the unity of Three in One, and the unity of Nine.
After all, there are three triangles with three vertices each: nine worlds of the Yggdrasil Tree, nine parts of the human psyche.
Nine hypostases of Odin (Thorsson, “Runic teachings”)
In addition, there is a theory that walnut is the knot of the fallen. He is also a symbol of Odin’s army, or in other words – the Symbol of the elite.

The sign of Helm of Awe on the shungite pendants set

Symbol Helmet of Terror or Helm of Awe on a shungite wholesale pendants. The fact is that it belongs to the most widespread in the past and the most famous now groups of Galdrastavs – the Aegishjalms, that is, Helmets of Horror (Icelandic ‘gishjalmur).
That is, these are signs in the form of four or eight rays that intersect with each other. And the simplest of which is a combination of four runes Algiz, ᛉ

Indeed, the culmination of the development of complex multi-pointed crosses was a widespread medieval magic symbol known as the Egiskjalm itself. In this case, it is considered that this symbol surpasses all the previous ones in the quality of the provided protection. Therefore, many modern authors call it the Cross of Invincibility.

We make engraved pendants and other products only from natural Shungite stone from the Zazhoginskoye deposit (Republic of Karelia, Russia). This fact is evidenced by our voluntary certificate.

1 review for Shungite pendants set 163 pieces, with engraved and geometric shape, wholesale 60% off 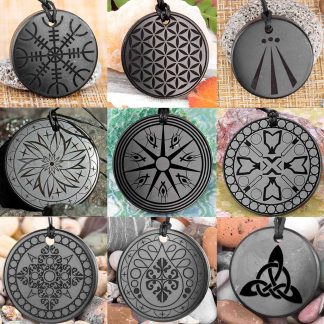