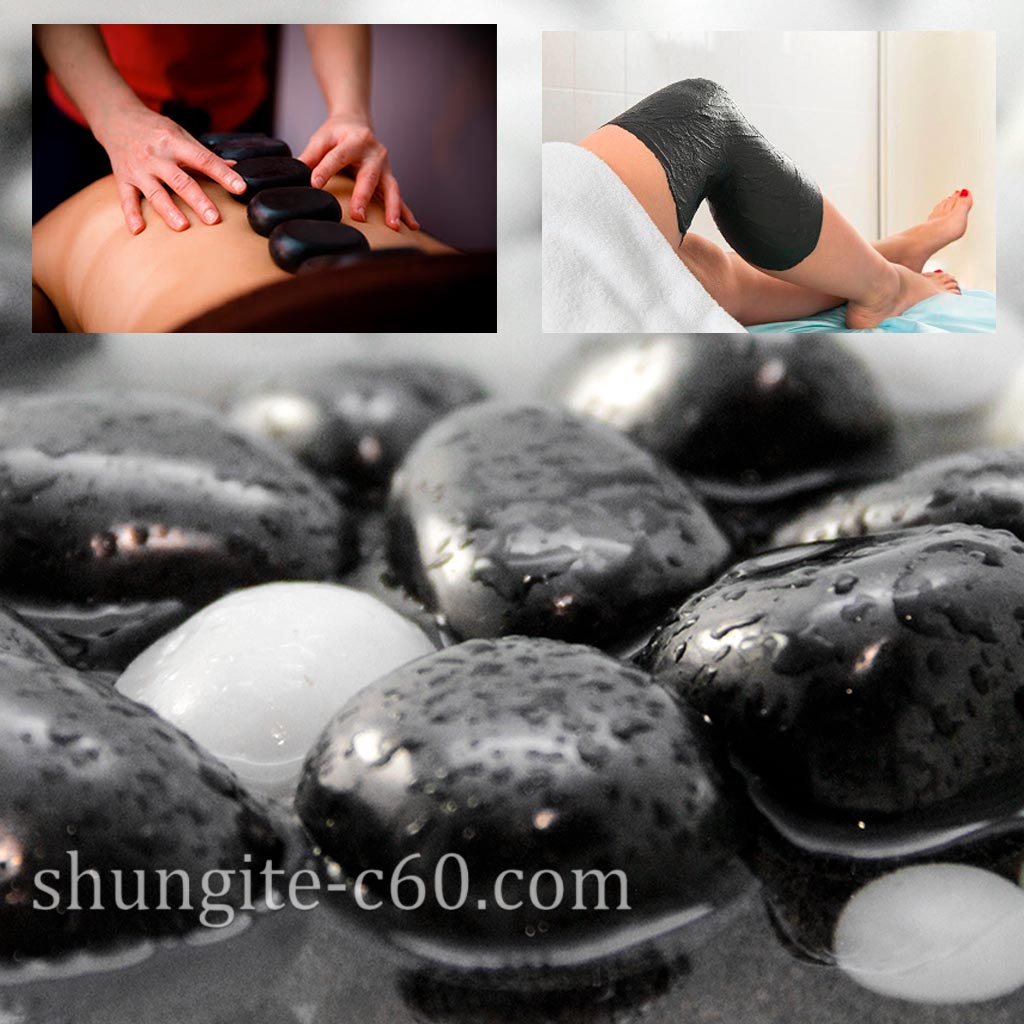 This section presents the shungite experience and results of studying the effectiveness of shungite (shungite paste are mixture of shungite powder and water). In this case, shungite was used for external use in patients with osteoarthritis of the knee joints.

Group of patients for research

The study included 15 patients with significant knee osteoarthritis with an average disease duration of 5.6 years and an average age of 48.9 years, all women. Two-sided process occurred in 60%, one-sided in 40% of patients. The stage of osteoarthritis was determined radiologically according to the Kellgren-Lawrence classification, 26.7% of patients showed changes in the joints corresponding to stage 1, 46.6% – stage 2, and 26.7% – stage 3 of the process. The severity of pain in the joints was evaluated on the VAS scale, impaired joint function using the Leken functional index.

During the experimentation process the shungite paste was applied evenly to the area of the affected joint for 24 hours (to obtain shungite experience in order to identify the possibility of side effects) every other day, 5-6 applications to the joint. It should be noted that no other types of treatment were received during the period of using the paste.

14 patients completed treatment with shungite paste. But 1 patient interrupted the course due to developed skin itching, which may be due to the characteristics of the body. It should be noted that 12 (85.7%) of the patients who completed treatment had a positive dynamics of the course of the disease, which was expressed in a significant reduction or even complete disappearance of joint pain by an average of 50%, and improvement in the function of the affected joints.

Shungite experience in this case did not reveal any side effects of treatment in patients who completed this course using shungite paste.
In General, the study conducted by shungit experience showed that shungit paste is an effective tool and can be used to treat patients with osteoarthritis of the knee joints.

Shungite infusion was used in the form of aseptic dressings for a period of 1 day. The paste was applied in the form of applications with an exposure of 30 min. up to 3 hours. These drugs were used in patients with the following morphological forms:

Shungite experience in this case has the following results. All patients with the beginning of the use of shungite infusion and paste have a marked improvement in General health, normalization of body temperature, reduction of pain, good epithelization of wounds, reduction of pericranial edema and hyperemia.
Thus, 80% of treated patients received a favorable result, which indicates the positive properties of these drugs.
Senior resident of the Leningrad regional clinical hospital V. M. Timoshenkov.

Republican hospital of the Ministry of health of Karelia, orthopedic and traumatology Department

The shungite infusion was used in the following ways:

The use of concentrated shungite infusion showed good cleansing of wounds and ulcers from fibro-purulent deposits, reduced granulation, accelerated marginal epithelization, which allowed to achieve epithelization of ulcers in all patients. There was an Erasure of osteomyelitis and a decrease in purulent discharge. A five-day bag wash for purulent prepatellar bursitis quickly stopped the purulent process and prevented the operation.

In recent years, the number of diseases with allergodermatoses has been steadily increasing. Traditional methods of treatment, as practice shows, are not effective enough.
Therefore, the development of new methods of treatment of such diseases is very relevant.
Currently, the antibacterial, antitoxic, antioxidant, and hepatoprotective properties of shungite have been proven.

For the treatment of dermatological pathologies, Karelian doctors tested shungite paste. All patients had a long-term history of the disease. All patients were repeatedly treated with conventional methods with a temporary effect.

Method of application of shugite paste: wet-drying bandages with paste were applied to the affected area for a day.
During the received shungite experience, it was established that all patients treated with shungite paste had a positive effect. Good therapeutic effect was observed in 55.6%, satisfactory – in 44.4% of patients. As shown by shungit experience in these studies, side effects on the background of the use of shungite paste were not observed as in other cases.

Shungite experience of using shungite baths and pastes for the treatment of patients in the cardiological sanatorium “Chernaya Rechka”, Saint Petersburg

There are 80 patients were treated at the average age of 58 years. Shungite baths were received by patients with hypertension I-II St. Other 35 people, neuro-circulatory dystonia, 5 people – rheumatic polyarthritis and 2 people, eczema of the hands-1 person. Applications of shungite paste were prescribed to patients with arthrosis and arthralgia of large and small joints of the extremities-20 people, osteochondrosis of the spine-17 people.

Shungite baths were made every other day lasting 15-30 minutes. Shungite paste was applied to the area of the affected joints also every other day.
As a result of treatment with shungite paste, there was a significant improvement and improvement in 100% of cases. In all patients, the joint syndrome disappeared. Portability is good. There were no refusals of treatment. But, it should be noted that shungite experience in this case determined that the effectiveness of treatment with shungite baths was not less 74%.

The obtained results of clinical use give reason to believe that the experience gained by shungite in the use of shungite preparations, especially in the form of applications, is very effective and promising.

Results of the use of complex shungite therapy of the HAC.
In 2013, the use of shungite was started in the state medical INSTITUTION “tsvmr “sanatorium rush”.

Shungite rooms were built in this medical Wellness center.
Patients of this institution visit the room as prescribed by a doctor.
Various procedures are assigned.

Shungite treatment rooms at the Russian Military Medical Academy (St. Petersburg). The fact is that the walls and floor in it are covered with a magnesian-shungite mixture. In this regard, in such a room, patients with heart problems are more effectively treated according to the observations of the doctors themselves. After all, patients sleep better and their blood pressure normalizes faster. In addition, patients need less drugs.

In addition, the military medical academy has another treatment ward for patient rehabilitation. The walls in it were lined with shungite tiles. The purpose of such a chamber is related to isolation from all electromagnetic radiation. After all, shungite stone possesses the ability to protect against EMF radiation. The success of the ward in treatment was noted by the head of the military medical academy in a letter of gratitude to the head of a shungite mining enterprise in Karelia.

Results of the shungite experience

In conclusion, we would like to summarize about shungite experience that has been gained in various different medical institutions, which was obtained in Russia. As a result, clinical trials using shungite in the form of paste and infusions in various concentrations and configurations showed the following effectiveness.

High efficiency of shungite application in balneology is provided by four main factors:

To bring maximum benefit we manufacture all our products from authentic shungite stone only. The full catalog of our shungite products is presented on this page. In addition, you can always learn more about the useful properties of shungite in this special article.